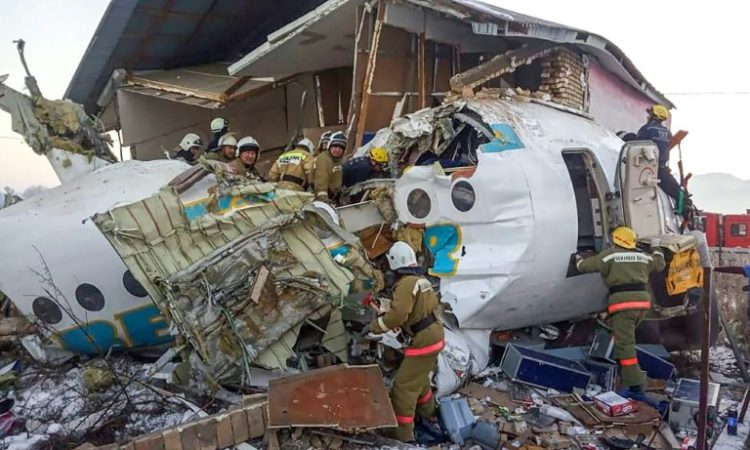 Twelve people died when a plane carrying 100 passengers and crew crashed shortly after takeoff in Kazakhstan on Friday and collided with a house, but many onboard survived without serious injury.

The 23-year-old plane operated by budget carrier Bek Air was torn apart and its nose crushed on impact with a building that partially collapsed, a video released by the Central Asian country’s emergencies committee showed.

The aircraft disappeared from the radar minutes after it took off from Almaty airport at 7.05 am (01:05 GMT) on its way to the capital Nur-Sultan with 95 passengers and five crew members aboard, the airport authority said in a statement.

It hit a concrete barrier and then slammed into an uninhabited two-storey house near the city’s boundary northeast of the airport.

Kazakhstan responded to the crash by grounding the Fokker model, which makes up the whole of the Bek Air fleet, and launched an investigation.

The country’s emergencies committee released a list of 12 people who died, including the captain.

The health ministry said 53 people had been injured, nine of them children, adding that 10 of the adults were in critical condition.

Most onboard were Kazakhs but the injured also included citizens of China, Kyrgyzstan and Ukraine.

Ukraine’s embassy in Kazakhstan said two of its nationals had spinal injuries but their lives were not in danger.

Neighbouring Kyrgyzstan’s foreign ministry said its representatives had visited a Kyrgyz woman injured in the crash and her condition was “satisfactory”.

China and Russia, Kazakhstan’s main political allies, were among those that sent official condolences, along with Pope Francis.

“Either this is a pilot error, or there were technical reasons,” Sklyar said at a press conference in Almaty.

“The aircraft split into two parts. Most of the passengers who died were in the front part.”

Russia’s pro-Kremlin REN TV channel broadcast what it said was a recording of communications between an air traffic controller at Almaty airport and the Bek Air crew.

The first eight victims died at the scene of the disaster, two then died while being treated at the airport and two in hospital.

Those confirmed dead included the captain Marat Muratbayev, as well as Rustam Kaidarov, a 79-year-old retired general, and 35-year-old Dana Kruglova, a journalist from the private Informburo news agency.

Informburo said Kruglova “had wanted to celebrate the New Year with her parents in Nur-Sultan and decided to take this flight”.

A well-known entrepreneur, Aslan Nazaraliyev, posted on Facebook that he had survived, indicating his seat on a photo of the crashed aircraft, right next to where it had split into two.

The air route between Almaty and Nur-Sultan became Kazakhstan’s most popular after the chilly steppe city replaced the southern financial hub as national capital in 1997.

Many Kazakhs regularly commute between the two cities, after government offices and large companies moved north to Nur-Sultan, formerly known as Astana before being renamed in honour of first Kazakh president Nursultan Nazarbayev.