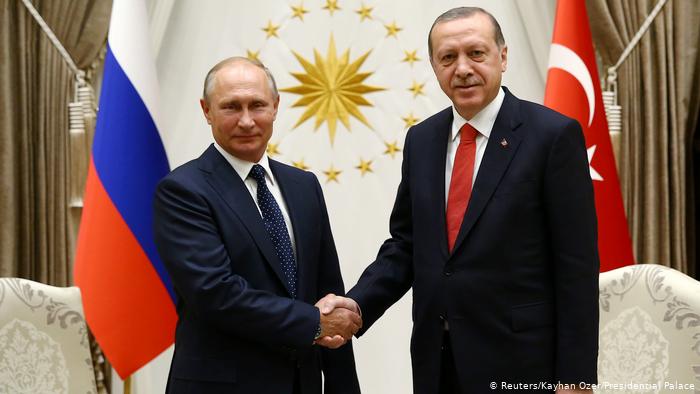 President Recep Tayyip Erdogan on Tuesday threatened to resume Turkey’s military offensive in Syria “with greater determination” unless the withdrawal of Kurdish fighters is completed under a US-brokered deal, as he headed to key talks with his Russian counterpart.

The Turkish leader was due to meet his Russian counterpart Vladimir Putin, hours ahead of a deadline for Kurdish fighters to withdraw from Syrian border areas or face a renewed Turkish assault.

Russia — a crucial ally of Syria’s President Bashar al-Assad — has demanded that Turkey respect the country’s territorial integrity and Putin will likely seek such commitments from Erdogan.

“We will have the opportunity to discuss steps to end (Kurdish fighters’) presence in regime-held areas,” Erdogan told reporters at an Ankara airport before departing for the Russian Black Sea resort of Sochi for his meeting with Putin.

Russia and Turkey have emerged as the main foreign players in Syria’s conflict, with Moscow’s position strengthened after US President Donald Trump announced this month he would be withdrawing American forces from the north of the country.

The announcement cleared the way for Turkey to launch a cross-border offensive on October 9 against the Kurdish YPG militia, which were key in the fight against the Islamic State group in Syria but viewed by Ankara as “terrorists” linked to the outlawed Kurdistan Workers’ Party (PKK).

Russian forces moved in to replace US troops last week in support of the Syrian army, whose help was requested by the Kurds.

Erdogan said last week he was not bothered by the Damascus regime’s return as what mattered to Ankara was pushing back the Kurdish fighters from the proposed 32 kilometre-deep (20 miles) safe zone.

“The most important thing for us is achieving long-term stability in Syria and the region,” Putin’s foreign policy adviser Yuri Ushakov told reporters ahead of the talks.

“We believe this can only be achieved by restoring the unity of Syria.”

Despite being on the opposite sides of the Syria conflict, Turkey and Russia are working together to find a solution to the war. Erdogan said he would also discuss the situation in Idlib during a meeting with Putin.

Assad said Tuesday that defeating jihadists in the northwestern region of Idlib is the key to ending the country’s eight-year-old civil war.

“The battle of Idlib is the basis for resolving chaos and terrorism in all other areas of Syria,” he said while visiting troops on the front line with jihadists in the town of Al-Hbeit in Idlib province, according to the president’s office on its social media networks.