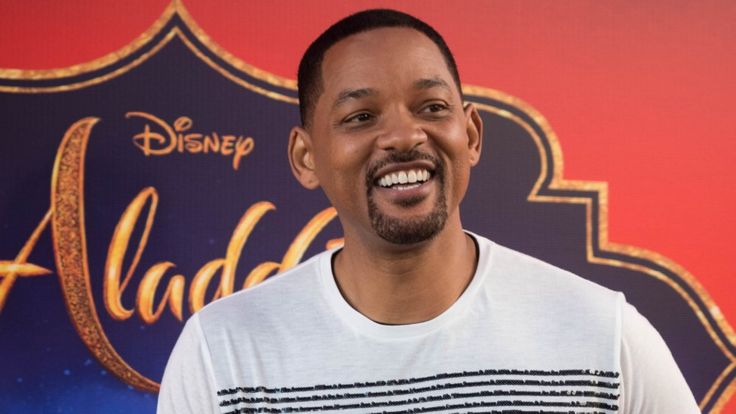 Aladdin and Jasmine are played by Mena Massoud and Naomi Scott
You might think the lead character in Aladdin is… well, Aladdin. But not according to the end credits of Disney’s new live-action remake.
Unlike the animated 1992 original, the genie is the first name seen in the new cast list – which is understandable given that Will Smith is the biggest name in the project by some distance.
Disney has opted for two relative newcomers for the roles of Aladdin and Jasmine – in the shape of Mena Massoud and Naomi Scott.
It was reported at the time of casting in 2017 that around 2,000 actors and actresses had been reading for the two roles over several months.
Riz Ahmed and Dev Patel had been linked with the title role, but the longer it remained vacant, the more Disney began looking at fresher faces instead.
“Finding a male lead in his 20s who can act and sing has proven difficult – especially since the studio wants someone of Middle-Eastern or Indian descent (the animated film is set in the fictional Middle Eastern city of Agrabah).
“The search has dragged on, with Disney and [director Guy] Ritchie having to go back to the drawing board multiple times.”
But the finished product has broadly gone down well with critics, if the first reviews are anything to go by.
“On the whole, Ritchie’s adaptation wisely does little except add human flesh to the bare bones of what was always one of Disney’s strongest stories,” said Steve Rose in The Guardian.
Geoffrey Macnab of The Independent described it as “a rip-roaring, old-fashioned matinee-style spectacle that turns out far better than we had any right to expect”.
In a three-star review for Digital Spy, Ian Sandwell said it was an “enjoyable retelling”, but was less keen on the “overlong, drab and CGI-heavy finale”.
Will Smith’s portrayal of the genie has also defied the sceptics, with Ben Lawrence in The Telegraph saying he “does a terrific job in bringing his own brand of manic chutzpah to the part”.
BBC