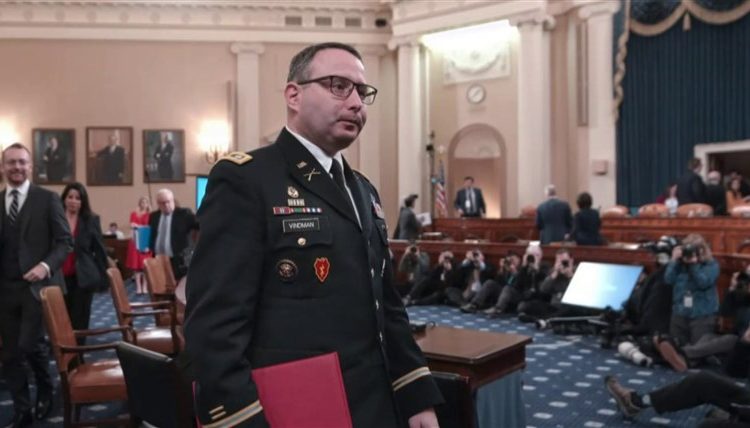 A senior official fired from the White House after testifying against Donald Trump during impeachment hearings has quit the military.

Lt Col Alexander Vindman was the victim of a “campaign of bullying, intimidation and retaliation” by the president, his lawyer said.

Lt Col Vindman’s “concern” over a phone call between Mr Trump and Ukraine’s president led to a Senate trial.

A statement said he had retired after 21 years of military service because his future would be “forever limited”.

His representative, David Pressman, said Lt Col Vindman had spoken publicly only once on the matter – under subpoena from Congress.

He said: “LTC Vindman did what the law compelled him to do; and for that he was bullied by the president and his proxies.”

Mr Pressman added that he had “put the interests of his country ahead of his own. “LTC Vindman’s patriotism has cost him his career,” he said.

On Monday, Senator and Iraq War veteran Tammy Duckworth said she had still not been assured by Secretary of Defence Mark Esper that the White House would not interfere with Lt Col Vindman’s promotion to full colonel.

However, one senior US defence official told Reuters on Wednesday that Mr Esper had approved Lt Col Vindman’s promotion on Monday, and that the list of promotions was to be sent to the White House in the coming days.

There has been no response from the White House yet to Lt Col Vindman’s retirement.

The call led to Mr Trump’s impeachment in December by the Democrat-majority House of Representatives for abuse of power and obstruction of Congress. Democratic lawmakers argued that the president had dangled US aid in exchange for political favours.

When asked how he had overcome his fear of retaliation in order to testify, Lt Col Vindman testified: “Congressman, because this is America… and here, right matters.”

After the Senate acquittal, Lt Col Vindman was escorted from the White House.

President Trump tweeted at the time: “Actually, I don’t know him, never spoke to him, or met him (I don’t believe!) but, he was very insubordinate, reported contents of my ‘perfect’ calls incorrectly, &. was given a horrendous report by his superior, the man he reported to, who publicly stated that Vindman had problems with judgement, adhering to the chain of command and leaking information. In other words, ‘OUT’.”