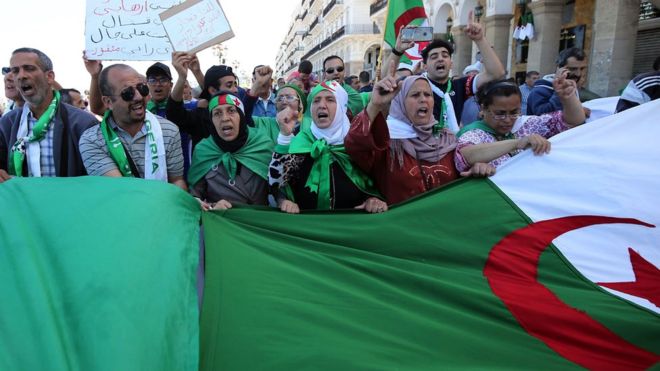 The body which oversees elections in Algeria says it is not possible to hold presidential elections as planned on 4 July.

A statement from the constitutional council said it was up to the president to name a new date for the vote.

Long-time President Abdelaziz Bouteflika resigned in April but demonstrators are pushing for greater change in the country’s ruling elite.

He was replaced by Abdelkader Bensalah as interim president but many view him as too close to the former leader.
Mr Bouteflika himself was widely seen as a front for a group of businessmen, politicians and military officials believed to hold real power in the country.

In its statement, read on state television, the constitutional council cited a lack of candidates as a reason for scrapping the scheduled vote.

Just two people had registered and protesters had demanded it be cancelled, fearing it would only prolong the current administration.

Demonstrators were again out on the streets of the capital Algiers on Friday, calling for President Bensalah and the prime minister to resign.
BBC