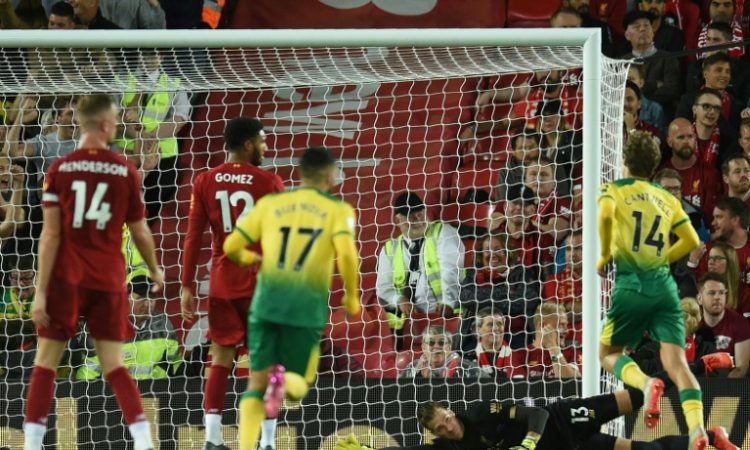 Liverpool could be without inspirational goalkeeper Alisson Becker for a number of weeks after the Brazilian suffered a calf injury in Friday’s 4-1 thrashing of Norwich to kick-off the Premier League season in style.

The European champions are aiming to end a 30-year wait to win the Premier League after missing out by only one point to Manchester City last season and laid down an early marker in the title race by racing into a 4-0 lead before half-time.

Norwich captain Grant Hanley’s hapless own goal just seven minutes in set the tone for what could be a long season for the Canaries before Mohamed Salah, Virgil van Dijk and Divock Origi netted as Liverpool shot out of the blocks.

However, the Reds’ joy was curtailed when Alisson pulled up after kicking the ball clear from a routine goal kick and needed support to limp off the field.

“Nothing bad to say about the game apart from Ali’s injury,” said Liverpool manager Jurgen Klopp, who confirmed his number one will miss Wednesday’s UEFA Super Cup clash with Chelsea in Istanbul.

“We have to see how serious it is and deal with it.”

Spanish goalkeeper Adrian only joined Liverpool this week on a free transfer after Simon Mignolet departed to join Club Brugge.

But the former West Ham stopper could now have a huge role to play in the coming weeks to ensure Klopp’s men cede no early ground in the title race to City with tricky matches against Southampton and Arsenal to come.

Friday’s game was already won before Alisson departed as from Origi’s low cross, Hanley’s wild hack at a clearance flashed beyond Tim Krul in the Norwich goal.

A Golden Boot winner in each of the past two seasons, Salah then opened his account for the season with a calm finish from Roberto Firmino’s pass on 19 minutes.

Despite a comfortable lead, Klopp was soon ranting at his players for letting their guard down as only a brilliant save from Alisson prevented Marco Stiepermann from halving Norwich’s deficit.

Seconds later and it was 3-0 as Norwich’s dreadful defending was exposed again to leave Van Dijk free to head home from a Salah corner.