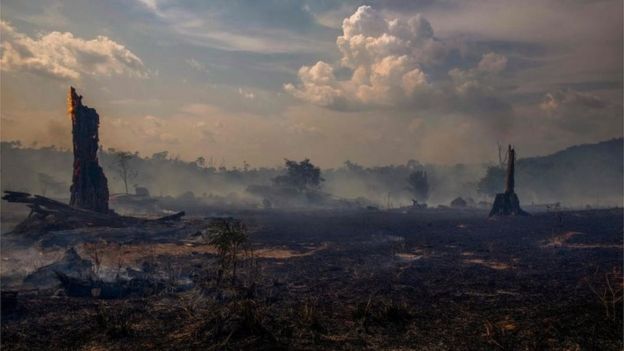 South American countries will meet to discuss a coordinated response to the fires ravaging the Amazon basin next week, Brazil’s President Jair Bolsonaro has announced.

It comes after he refused a G7 offer of $22m (£18m) following a spat with French President Emmanuel Macron.

Governors of the nine worst affected regions have urged him to reconsider.

Mr Bolsonaro has now accepted Chile’s offer of four planes to fight the fires, the most in Brazil since 2010.

He revealed all countries in the Amazon region, apart from Venezuela, will meet on 6 September to further discuss a common policy.

However, speaking after meeting his Chilean counterpart Sebastian Pinera, Mr Bolsonaro said he was not yet prepared to accept the G7 offer.

“The French government called me a liar,” he said, according to Reuters news agency. “Only after it has recanted what it said about me … and the Brazilian people, who do not accept this diminution of the Amazon’s sovereignty … then we can talk again.”

The Amazon is a vital carbon store that slows down the pace of global warming.

President Bolsonaro said last week that his government lacked the resources to fight the fires.

As international concern over the fires spread, leaders of the seven leading industrial nations meeting in France offered $22m to help fight the fires.

President Macron, who was hosting the summit, said the funds would be made available immediately – primarily to pay for more firefighting planes.

But President Bolsonaro rejected the offer arguing that the G7 countries were treating Brazil like “a colony or a no-man’s land”.