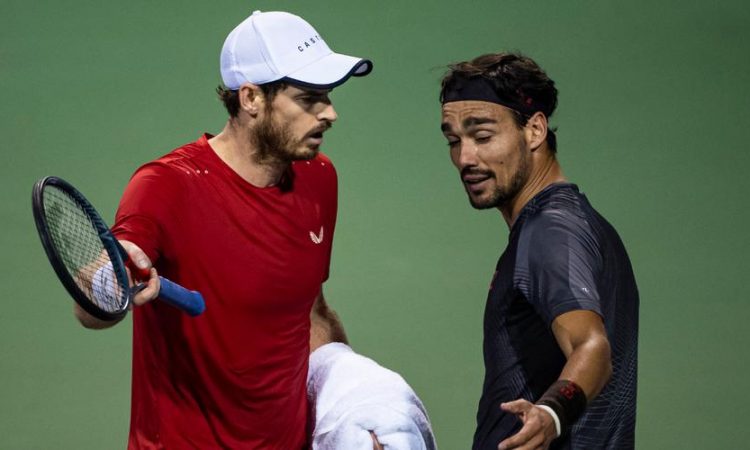 A fuming Andy Murray accused Fabio Fognini of shouting during a critical point as the Briton went down fighting in three bitter sets at the Shanghai Masters on Tuesday.

The two players confronted one another in a lengthy exchange by the net near the end of a bad-tempered match that stretched past three hours, with Murray telling Fognini to “shut up”.

But Murray, 32, on the comeback from career-saving hip surgery in January, said: “Someone made a noise, I didn’t know who made the noise, I looked in the direction of where the noise came from.

“I was like, ‘I was just about to hit a shot and someone made a noise’. He then told me to stop looking at him,” Murray added.

“The sound came from him, which you’re not allowed to do, it’s against the rules, it’s hindrance, you shouldn’t do it.”

The three-time Grand Slam winner was frustrated the chair umpire failed to intervene as the match turned increasingly sour.

Tuesday should have been a day for minor celebration after the Australian Open said that Murray will make his return to Grand Slam tennis there in January, a year after surgery.

“Fabio wanted to engage with me, I probably shouldn’t have done, but I am not having him talk to me like that on court,” said Murray of their exchange.

The former number one was also annoyed he repeatedly served for the match but failed to win.

“I want to say that’s the first time ever in my career that that’s happened,” Murray said.

“I think it’s the first time I served for a match twice and not won.”

Ruthless Roger Federer claimed victory in his opener with a straight-sets win over Spain’s Albert Ramos-Vinolas.

The third-ranked Federer is looking to end the season on a high with a fourth title of the year — although he failed to win a 21st Grand Slam this season.

The 46th-ranked Ramos-Vinolas put up a better fight in the second set, forcing the tie break and taking a 2-0 and then 4-1 lead.

But cheered on by his band of local supporters, who held aloft banners proclaiming their hero “superhuman”, Federer won the tie break — and the match — with a forehand smash.

Federer said a loss to the Spaniard in 2015 in Shanghai had driven him on.

“The truth, yeah, I was thinking about it, watched highlights,” said the Swiss maestro.

“Remember how it felt, I had my chances. I won many more points that time than I lost, so I should have actually won that match.”

Red-hot Daniil Medvedev, the US Open finalist, got his tournament off to a flying start with a 6-3, 6-1 demolition of Britain’s Cameron Norrie.