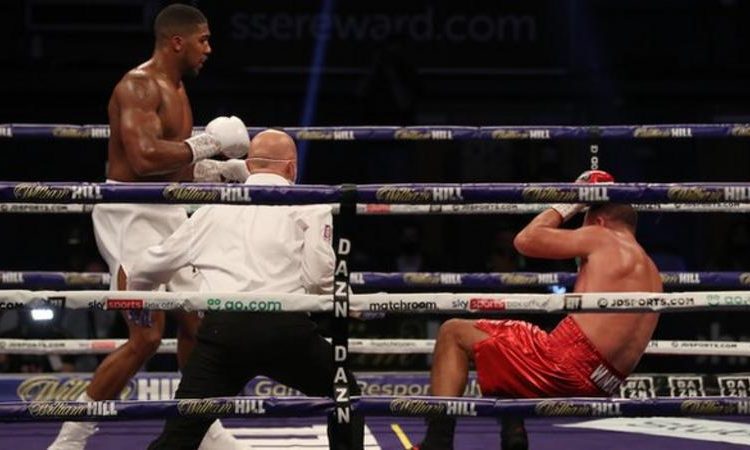 Unified world heavyweight champion Anthony Joshua mixed power and patience as he knocked out Kubrat Pulev to raise hopes that a historic fight against Tyson Fury could soon be a reality.

The Briton smashed home a hard right hand in round three that forced his mandatory challenger to face a count and then sent him to the canvas with an uppercut seconds later.

Joshua, perhaps fatigued by the chaos, stepped off the gas and allowed Pulev to at least offer some mild threat, but a barrage of uppercuts in the ninth dropped the Bulgarian and a straight right hand wiped him out.

Moments after this fine blend of poise and heavy punching, the 1,000 fans granted access to Wembley Arena roared at the prospect of the IBF, WBA and WBO champion facing WBC title-holder Fury next.

“Whoever has the belts I want to compete with. If that is Tyson Fury, let it be Tyson Fury,” said Joshua, 31.

Joshua, in a white sleeveless hoodie for his ring walk, was smart from start to finish on a night when the widespread anticipation of a fight with Fury – in which all four world heavyweight titles could be contested for the first time – dominated the narrative.

In his past two outings, Joshua has stood up to immense pressure. A second defeat by Andy Ruiz Jr in December would have left his career in tatters. He was punch perfect on that night.

A loss on Saturday would have made him the instant fall guy amid public demand for the Fury bout. Once again he was emphatic.

He found his range early on with flicked jabs as 39-year-old Pulev boxed cautiously and struggled to throw anything fast or crisp.

When the challenger did throw a jab in the third, a counter right landed on his jaw and stunned him. Pulev briefly tried to smile and roar in the face of adversity but eventually turned his back while under attack and faced a count. In a frenzied spell, an uppercut then sent him to the canvas before the round was out.

The pair punched one another after the bell, exchanged glares before the fifth and, while Pulev gained at least a footing in the following rounds, he was never able to land anything that would allow him to dictate.

Some will ask why Joshua was unable to end things more quickly, but after a year out of the ring, he controlled a fight against a man who had just one loss – to Wladimir Klitschko – on his record.

He could not miss with the right uppercut all night and the shot dropped the game Pulev in the ninth, before a jolting straight right to the chin left him unable to answer the count as the champion swaggered away, aware his night’s work was over.

It is testament to Joshua that he continues to rise to such mental challenges.

Fury will move better than Pulev, punch with far greater variety, believe in himself more and set far more traps in the ring.

He will also inevitably bring a whole new level of mental warfare to any build-up should the fight happen.

Hope has never been higher that it will.

No sooner had Pulev regained his footing, Joshua’s promoter Eddie Hearn said efforts to make the Fury fight would start “tomorrow”, adding: “It’s the only fight to be made in boxing. It is the biggest fight in British boxing history.”

Fury’s co-promoter Bob Arum – one of several key power brokers involved – said he would work from Monday to make the “biggest fight since Muhammad Ali v Joe Frazier in 1971”.

That such integral figures seem so positive, coupled with the fact an agreement over a financial split is said to already be in place, offers real hope the two could appear in what Fury’s UK promoter Frank Warren repeatedly says will be the “biggest UK sporting event since the 1966 World Cup final”.

There are many issues to resolve before a date is in place – complex television broadcast deals and a venue among them. The sight of 1,000 fans singing Sweet Caroline before Joshua’s ring walk showed a return to packed out arenas – which will be a necessity for this event – is closer.

In the ring, the pair are both showing signs of improvement. Fury moved from elusive fighter to front-foot aggressor in beating Deontay Wilder last time out. Joshua – on Saturday and in beating Ruiz – has shown he too can do more than just wield knockout punches.

This was defence number one of his second reign as champion. A small cluster of men – Ali, Lennox Lewis and Mike Tyson among them – have had the chance to take the heavyweight world champion journey a second time.