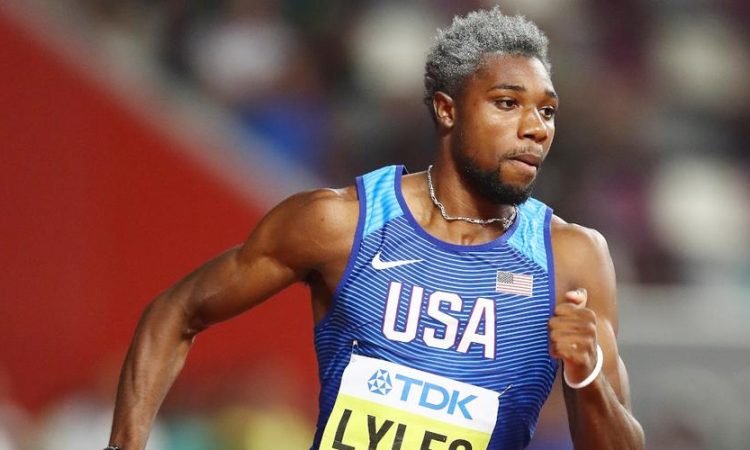 Silver-haired sprint star Noah Lyles eased into the 200m semi-finals at the World Championships on Sunday and revealed he is ready to take a crack at Usain Bolt’s world record.

The 22-year-old from Florida, who has been dyeing his hair silver this season in a tribute to a character in a Japanese animated cartoon series, sauntered through his heat at the Khalifa Stadium in 20.26sec.

The Diamond League champion finished second behind Trinidad’s Jereem Richards but had eased up well before the finish line in an attempt to conserve energy.

“I was really just trying to get hold of my legs,” Lyles said afterwards. “I felt they were like spurting in the middle of the race. I was like ‘Calm down legs, we’ve got two more rounds’.

“I thought I would be more tired But I feel in really good shape to do something.”

Lyles, who would become the youngest 200m world champion in history with a gold medal in Doha, has the world’s fastest time this season, clocking a blistering 19.50sec in Lausanne in July.

The American believes an assault on Bolt’s 10-year-old world record of 19.19sec is also feasible.

“I’ll be going after anything and everything,” Lyles said afterwards when asked about the record.

“Of course the gold is first and whatever time pops up, I’ll just be ready. I feel like I’m in some pretty good shape.

“So we’ll see how the rounds keep going. Y’all going to just have to watch.”

Lyles’ path to gold potentially got easier on Sunday after newly minted 100m champion Christian Coleman scratched from the event after complaining of soreness.

“It was a great performances, I love to see a fast time,” said Lyles, adding he was not disappointed by Coleman’s decision to withdraw.

“The goal is still the same,” he said. “I came out here to win, and that ain’t gonna change.”

Meanwhile Lyles plans to complete his silver-haired transformation by the end of the championships.

“I was in the bathroom for five minutes making sure I got all the edges,” he quipped on Sunday.