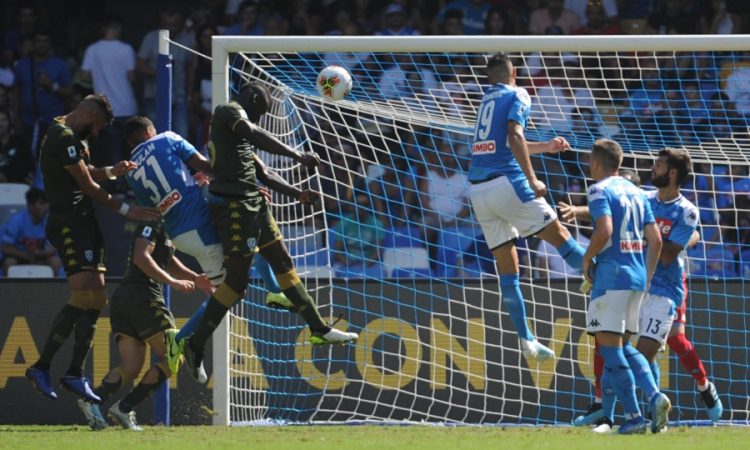 Mario Balotelli scored his first goal for new club Brescia but the promoted northerners still fell to a 2-1 defeat to Napoli in Serie A action on Sunday.

The 29-year-old Italian international headed in after 67 minutes in his second match for his hometown club having missed four games because of a ban he incurred with former club Marseille.

First-half goals by Dries Mertens and Kostas Manolas ensured Napoli took all three points after their midweek loss to Cagliari, to boost confidence ahead of their Champions League trip to Belgian club Genk.

Inter have a maximum 18 points from six games — two ahead of Juve — after winning their first six league matches for the first time since the 1966-67 season.

Juventus beat SPAL 2-0 to stay second with Atalanta third — a point ahead of Napoli — after thrashing Sassuolo 4-1 on Saturday.

Balotelli carried his daughter Pia, who lives in Naples with her mother and was decked out in the Napoli colours, onto the pitch at the San Paolo Stadium.

The home side were without Senegalese defender Kalidou Koulibaly who has been given a two-match ban for his red card in the Cagliari game.

Ancelotti’s side went ahead after 13 minutes. Mertens connected with a Jose Callejon cross to blast in his 114th goal in a Napoli jersey — one shy of Argentine legend Diego Maradona’s total from 1984 to 1991. Slovak Marek Hamsik leads both with 121.

The 32-year-old Belgian international has been in form this season with four goals in five Serie A games. He also converted a penalty in the 2-0 Champions League win over holders Liverpool.

Manolas thought he had scored on 19 minutes but the goal was ruled out after a VAR review. The Greek defender did head in just before the break off a Mertens corner.

Napoli’s tempo dipped after the break allowing the promoted side to get back into the game.

Balotelli reduced the deficit getting his head to a Sandro Tonali corner to serve notice to Italy coach Roberto Mancini of his ambitions to play Euro 2020.

Brescia slip to 14th in the table after their fourth defeat in six games.

AS Roma play in Lecce later on Sunday with AC Milan hosting Fiorentina.