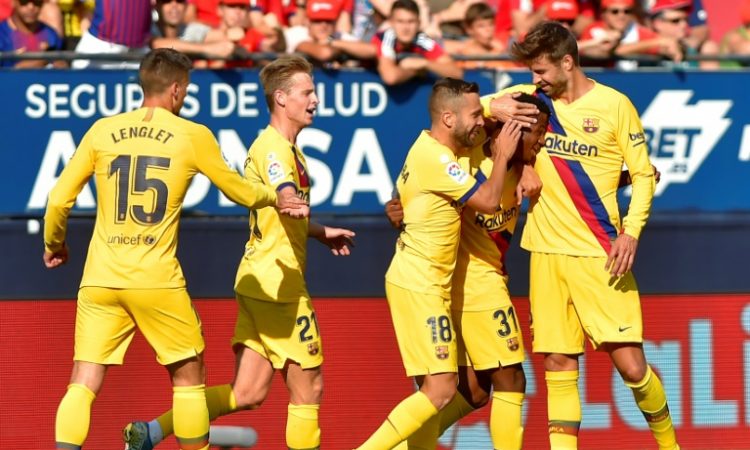 Ansu Fati became the third youngest player to score in La Liga on Saturday but the 16-year-old could not rescue Barcelona from being held to a 2-2 draw away at newly-promoted Osasuna.

Fati equalised five minutes after coming on at half-time and Barca looked likely to complete the comeback when Arthur Melo, also on a substitute, made it two 13 minutes later at El Sadar Stadium.

Yet Roberto Torres, who had given Osasuna an early lead, delivered a twist by scoring a late second from the penalty spot after Gerard Pique handballed.

As Barcelona refuse to give up on their pursuit of Neymar before the transfer window closes on Monday, this was another reminder of the talent that already exists in their ranks.

Coach Ernesto Valverde appears ready to look to the future rather than the past, with Carles Perez, a 21-year-old product of La Masia, also providing two assists on his second consecutive start.

He should even have scored the winner but the concern will be that Barca needed Fati and Perez at all, even taking into account the injuries to Lionel Messi, Luis Suarez and Ousmane Dembele.

Antoine Griezmann put on a statement display in the win over Real Betis last weekend but he was quiet again here and it remains to be seen whether the club’s president Josep Maria Bartomeu feels negotiations for Neymar should now be pushed over the line.

Guillermo Amor, Barcelona’s director of institutional relations, told Movistar on Saturday the deal is not dead.

“The market closes soon but we still have a few days,” said Amor. “Nothing is done and we are waiting to see what can happen. Of course, something can happen at the last minute. We are calm.”

Roberto Torres also came through the ranks at Osasuna and has more than 200 appearances for the club. His double means they are unbeaten from their first three games, having returned to the top flight for the first time since 2017.

Both teams stood for a minute’s silence before kick-off in a show of support for Luis Enrique, Barcelona’s former coach and player, whose daughter Xana died aged nine last week. Barca’s fans then chanted his name when the silence ended.

Barcelona started badly and got worse in the second half, the opening 45 minutes strewn with misplaced passes and lacking a single chance for the visitors.

Osasuna also forced the issue, pressing hard and showing more bite than Barca, with Brandon and Roberto Torres causing a raft of problems for the Barca back line.

Their goal came from Brandon, who twisted and turned down the right to leave Clement Lenglet on the floor. He sent a cross to the back post where Nelson Semedo got caught and Roberto Torres smashed home.

Barcelona never found their rhythm and it might have been Sergi Roberto putting a simple pass out of play that persuaded Valverde to make a half-time change.

Fati came on for Semedo, with Sergi dropping into right back. The goal came from that side too as Perez crossed and Fati rose high, hung in the air and powered a header inside the post.

Transformed, Arthur came on for Rafinha two minutes later and within a minute, Barca scored again. Perez provided the assist, freeing Arthur who used Jordi Alba’s overlapping run to cut inside and curl into the far corner.

The hard work looked done but Osasuna rallied. Juan Villar tested Marc-Andre ter Stegen and with nine minutes left, Pique handballed, allowing Roberto Torres to slide in the penalty for his second of the game.

Perez might have won it for Barcelona in the 88th minute. He had only Osasuna’s Ruben to beat but was caught in two minds and the chance was gone.