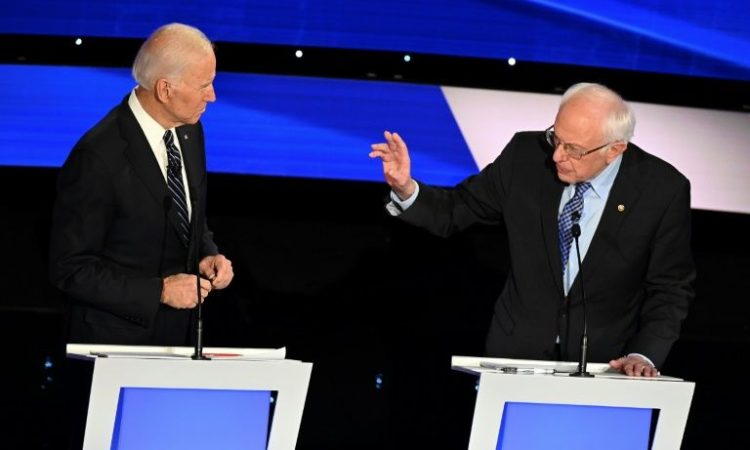 Frontrunner Joe Biden and a fading Bernie Sanders will meet Sunday night in Washington in their first head-to-head televised debate in a Democratic primary overshadowed by the coronavirus pandemic.

This 11th Democratic debate, which begins at 8 pm (0000 GMT Monday), will place the most intense spotlight yet on the duel between the former vice president and the socialist senator from Vermont, the only major candidates still standing in the race to challenge Donald Trump in November.

CNN’s stage will seem strikingly empty: when the Democratic debates began back in June, the 20 candidates had to be split into two groups to appear on successive nights.

And owing to the coronavirus epidemic, there will be no live audience. The debate was moved from Phoenix, Arizona — in one of four states holding a primary on Tuesday — back to national capital Washington.

Also voting Tuesday in the Democrats’ nomination marathon are Florida, Ohio and Illinois, three of the country’s most populous states, with large troves of Democratic delegates.

All four states decided to go ahead with their votes despite concerns about the virus, which has made it ever more difficult for the candidates to campaign.

The southern state of Georgia, which was next in line to vote on March 24, is delaying its primary until May 19. Louisiana had earlier postponed its planned April 4 election to June 20.

Both Biden and Sanders have had to cancel planned rallies.

That could pose a particular handicap to Sanders, who has consistently mobilized large and enthusiastic crowds at his campaign events.

Another difficulty: The pandemic has sharply raised the pressure for the parties to come together to craft urgent solutions; Biden often touts his own ability to reach across the aisle to forge compromise.

One thing the two Democrats agree on: Trump, they say, is simply not up to dealing with such a complex and fast-moving crisis.

Sanders may find one advantage. The coronavirus crisis has exposed some of the vulnerabilities he often denounces in the US health system as he calls for the federal Medicare system to be expanded to cover all Americans.

The 77-year-old Biden, after a near-calamitous start to the primary season, has staged a spectacular comeback, easily winning key primaries and drawing support from an array of moderate Democrats convinced he is the candidate best placed to defeat Trump.

He holds double-digit polling leads in all four states voting Tuesday — even a 40-point advantage in Florida.

A new NBC News survey released Sunday gives Biden a 61-to-32 nationwide lead over the 78-year-old Sanders, who just weeks ago was the putative leader of the race.

And yet the senator hardly seemed ready to throw in the towel when he delivered remarks Wednesday after a stinging defeat in the Midwest industrial bastion of Michigan.

Sanders admitted having, at least for now, lost the fight on the key question of electability: He had failed to draw new young voters to widen the party’s base, as he had often promised to do.

Still, he declared his intention to directly challenge Biden in the debate on issues closest to his heart.

Previewing the questions he plans to ask, Sanders listed some of those concerns — health care, student debt, climate change — saying repeatedly, “Joe, what are you going to do?”

For some, this was a way for Sanders to gain a last bit of leverage before finally dropping out — to help secure some gains from his “political revolution” and bring some of his progressive ideas more firmly into the nation’s political mainstream.

Whatever happens, Sanders said, he had “won the ideological (and) generational” debates.

He then shifted his fire from Biden to the Republican president, saying, “Donald Trump must be defeated, and I will do everything in my power to make that happen.”

Biden, who campaigns on a more centrist if less detailed platform, extended a conciliatory hand on Tuesday, saying that “together, we will beat Donald Trump.”

It remains to be seen how well the former vice president, who is a prolific gaffe generator and sometimes seems to fade late in debates, will endure the two-hour encounter with Sanders.

Regardless, Biden is comfortably ahead of Sanders in delegates to the Democrats’ presidential nominating convention in July.

And the big states voting Tuesday should help him consolidate his lead.

That appears particularly likely in Florida, where Sanders offended many Hispanic voters with comments they considered far too friendly to the Communist regime in Cuba.