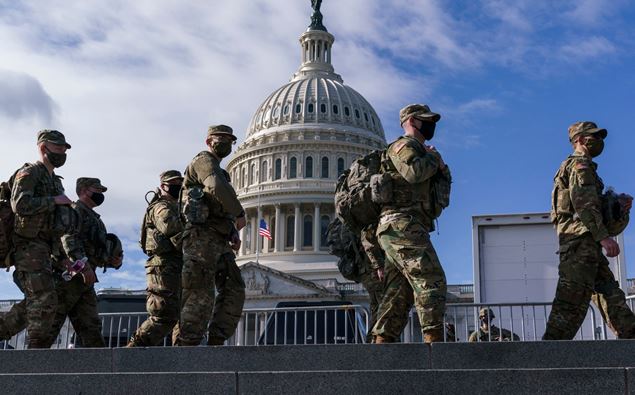 Small groups of protesters – some of them armed – gathered on Sunday at statehouses in the US, where tensions are high after the deadly riots at the Capitol in Washington.

Protests were held outside capitol buildings in Texas, Oregon, Michigan, Ohio and elsewhere.

But many other statehouses were quiet, amid a ramping up of security across US legislatures. No clashes were reported.

The FBI has warned of armed protests ahead of Wednesday’s inauguration.

More than 25,000 National Guard troops are being deployed to secure Washington. In a sign of just how worried officials are about potential unrest, Army Secretary Ryan McCarthy told the Associated Press on Sunday that all Guard members were being vetted because of fears of an insider threat.

Also on Sunday, a county official from New Mexico was arrested in Washington in connection with the riots at the US Capitol on 6 January.

Couy Griffin, the founder of a group called Cowboys for Trump, had vowed to return on inauguration day with firearms to “embrace my Second Amendment”.

Many cities had prepared for potentially violent protests over the weekend, erecting barriers and deploying thousands of National Guard troops.

Posts on pro-Trump and far-right online networks had called for armed demonstrations on Sunday in particular, but some militias told their followers not to attend, citing heavy security or claiming the planned events were police traps.

Small crowds of protesters numbering in the dozens gathered in only some cities, leaving the streets surrounding many statehouses largely empty.

The New York Times reported about 25 members of the Boogaloo Bois movement were among heavily-armed protesters who gathered at the statehouse in Columbus, Ohio. But the men – who are part of a loosely organised extremist group that wants to overthrow the US government – said they were there for a long-planned gun rights rally.

Meanwhile in Michigan, about two dozen people – some carrying rifles – protested outside the statehouse in Lansing, as police watched on.

“I am not here to be violent and I hope no one shows up to be violent,” one protester told Reuters news agency.

A similarly small group of about a dozen protesters, a few armed with rifles, stood outside the Texas Capitol in Austin.

Outside Pennsylvania’s capitol in Harrisburg, one Trump supporter noted the poor turn-out, telling Reuters: “There’s nothing going on.”

More protests are expected on Wednesday, when Mr Biden will officially be sworn into office, replacing Mr Trump as president.

Mr Biden will issue executive orders to reverse President Trump’s travel bans and re-join the Paris climate accord on his first day in the White House.

The president-elect is also expected to focus on reuniting families separated at the US-Mexico border, and to issue mandates on Covid-19 and mask-wearing.

Much of Washington DC has been locked down ahead of the inauguration. The National Mall, which is usually thronged with thousands of people for inaugurations, has been shut at the request of the Secret Service.

The Biden team had already asked Americans to avoid travelling to the nation’s capital for the inauguration because of the Covid-19 pandemic. Local officials said people should watch the event remotely.