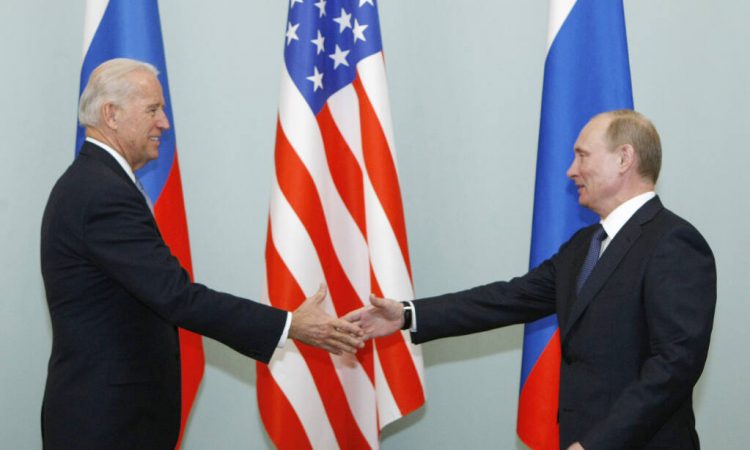 FILE - In this March 10, 2011, file photo, then Vice President Joe Biden, left, shakes hands with Russian Prime Minister Vladimir Putin in Moscow, Russia. President Joe Biden will hold a summit with Vladimir Putin next month in Geneva, a face-to-face meeting between the two leaders that comes amid escalating tensions between the U.S. and Russia in the first months of the Biden administration. (AP Photo/Alexander Zemlianichenko, File)
83views

US President Joe Biden and his Russian counterpart Vladimir Putin are meeting for their first, highly-anticipated summit.

The talks in Geneva, Switzerland, come at a time when both sides describe relations as being at rock bottom.

Discussions are set to include arms control and US allegations of Russian cyber-attacks.

No major breakthroughs are expected but there are hopes of finding small areas of agreement.

The arrangements for the meeting were carefully choreographed. The Russian president flew into Geneva on Wednesday before being taken by motorcade to the grand villa overlooking Lake Geneva where the summit is taking place.

Mr Biden, who arrived in the city on Tuesday, then headed to the villa where the two leaders shook hands.

Both are accompanied by senior officials for the talks.

The meeting comes on the tail end of Mr Biden’s first foreign trip as US president, in which he has also attended meetings with G7 and Nato leaders. Going into the summit, Mr Biden has stressed that he has the backing of his Western partners.

The choice of Geneva as the setting harks back to the Cold War summit between US President Ronald Reagan and Soviet leader Mikhail Gorbachev in 1985.

Neither the US nor Russia currently has an ambassador in-country, and Russia recently included the US on its official list of “unfriendly states”.

However, Mr Biden has said the meeting is an important step if they are to ultimately find “stability and predictability” in relations, while Mr Putin told state TV there were “issues where we can work together”.

But Yuri Ushakov, Mr Putin’s foreign affairs adviser, told journalists there was “not much” ground for optimism, while Kremlin spokesman Dmitry Peskov said the talks would be “very difficult”.

Meanwhile, asked if the leaders – who previously met while Mr Biden was vice-president – would share a meal together, one senior US official told AFP news agency: “There will be no breaking of bread.”