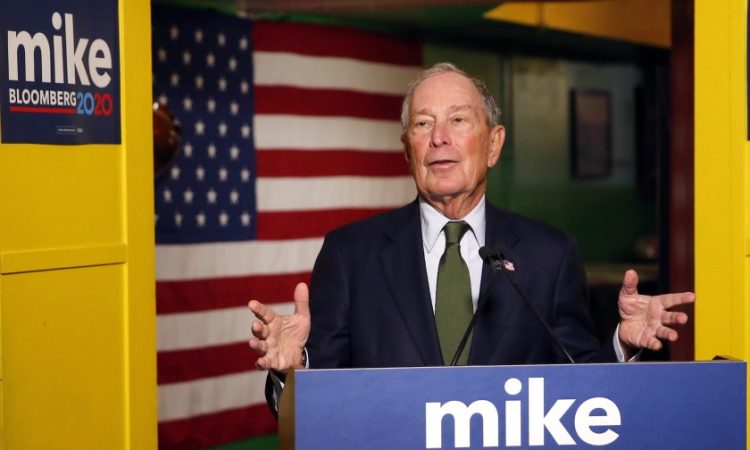 Michael Bloomberg, one of the world’s richest men and a candidate to take on President Donald Trump next year, has denied trying to buy the White House.

Mr Bloomberg’s rivals for the Democratic presidential nomination have accused him of doing exactly that.

The ex-New York City mayor entered the race in late November with one of the largest political ad buys ever.

Despite his late entry to the race, he is currently polling fifth on 4% out of 15 candidates.

Asked to respond to the claim he was buying the election, Mr Bloomberg told CBS of his rivals: “I’m doing exactly the same thing they’re doing, except that I am using my own money.

“They’re using somebody else’s money and those other people expect something from them.

“Nobody gives you money if they don’t expect something. And I don’t want to be bought.”

Liberal Democratic front-runners have been criticising Mr Bloomberg, who used to be a Republican.

“I don’t believe that elections ought to be for sale,” Senator Elizabeth Warren said on Mr Bloomberg’s own network – Bloomberg TV – on Thursday.

Ahead of the interview she also purchased a TV ad on Mr Bloomberg’s network, in which she accuses him of trying to buy the election to avoid paying higher taxes.

According to Bloomberg News, he has spent $59m (£45m) on advertising since entering the race, relatively late in the political season.

Asked by CBS why he had changed his mind about running – after saying in September that he would not – he cited a weak Democratic field.

“I watched all the candidates. And I just thought to myself, Donald Trump would eat them up,” he said.

Mr Bloomberg also said he did not warn former Vice-President Joe Biden – another leading Democratic 2020 candidate – that he planned to enter the race.

The tycoon also said he was not trying to take Joe Biden’s “job”, amid accusations that he had only thrown in his hat because of Mr Biden perceived weakness.

Mr Bloomberg’s net worth is $52bn, according to Forbes – 17 times more than Mr Trump.

Before setting up a mass media empire, Mr Bloomberg made his billions from data terminals widely used in the financial industry.