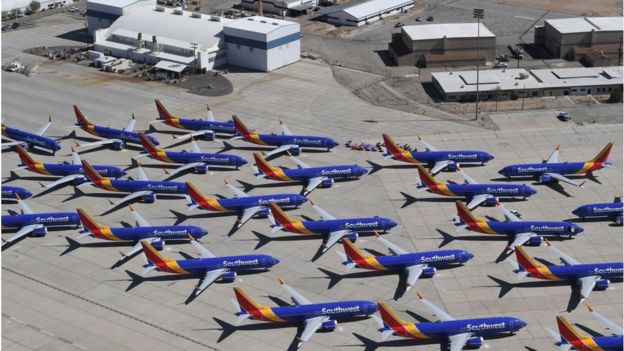 Boeing is taking a $4.9bn hit to cover costs related to the worldwide grounding of its 737 Max aircraft.

The charge is set to wipe out profits when the world’s biggest planemaker posts quarterly results next week.

In a statement, Boeing also said its “best estimate at this time” is that the aircraft will return to service in the last three months of this year.

A 737 Max crash in Indonesia in October, and another in Ethiopia in March, killed 346 people in total.

Boeing is facing one of the worst crises in its history after its best-selling aircraft was grounded worldwide after the disasters.

Crash investigators have concentrated their efforts on the aircraft’s control system and Boeing has been working with regulators to roll out a software upgrade.

The manufacturer, facing intense scrutiny over the regulatory clearance for the aircraft to fly, has cut the monthly production rate from 52 to 42 as airlines hold off purchases.

Most of the $4.9bn charge will be used to compensate Boeing’s customers for schedule disruptions and delays in aircraft deliveries.