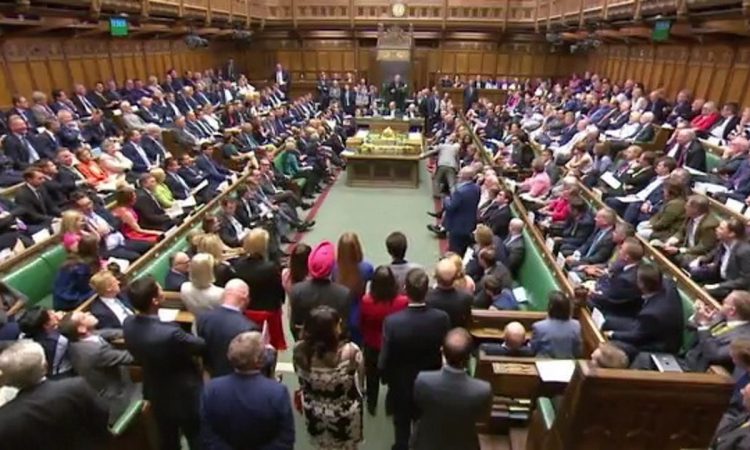 Boris Johnson has hit the pause button on his Brexit legislation after MPs rejected his plan to get it through the Commons in three days.

MPs backed his Withdrawal Agreement Bill – but minutes later voted against the timetable, leaving it “in limbo”.

After the vote, EU Council President Donald Tusk said he would recommend EU leaders backed an extension to the 31 October Brexit deadline.

But a No 10 source said if a delay was granted, the PM would seek an election.

On Saturday, Mr Johnson complied with a law demanding he write to the EU to ask for a three-month extension, but did not sign the letter.

Following the result in the Commons, he said it was Parliament and not the government that had requested an extension.

Mr Johnson said he would reiterate his pledge to EU leaders, telling them it was still his policy to leave by the end of October.

But Commons leader Jacob Rees-Mogg told MPs it was “very hard” to see how the necessary laws could be passed to leave with a deal by the deadline.

A spokesman from the European Commission said: “[The Commission] takes note of tonight’s result and expects the UK government to inform us about the next steps.”

But Mr Tusk tweeted he would “recommend the EU27 accept the UK request for an extension” in order to “avoid a no-deal Brexit”.

The BBC’s Europe editor Katya Adler said: “[The] temptation amongst most I speak to tonight in EU circles is to grant the 31 Jan extension.”

And the BBC’s political editor Laura Kuenssberg said that meant the government’s plan to seek an election was “looking likely”.

However, an EU source told BBC Brussels reporter Adam Fleming the bloc was considering a “flextension” – an extension with a maximum end date, but the flexibility for the UK to leave early if a deal is ratified.