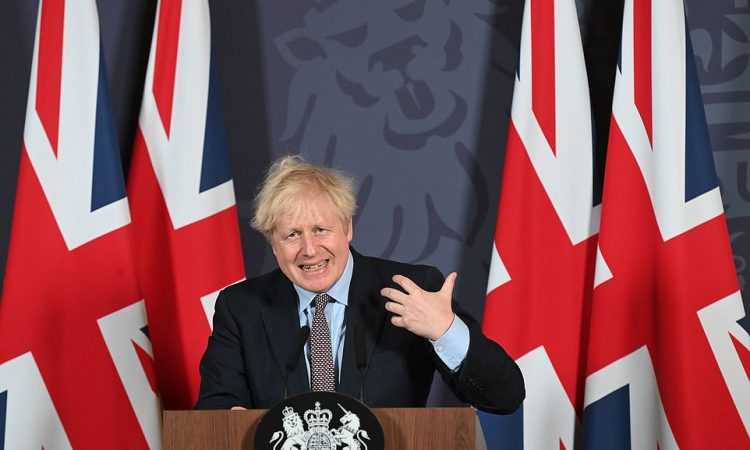 The EU and UK have reached a post-Brexit trade deal, ending months of disagreements over fishing rights and future business rules.

At a Downing Street press conference, Boris Johnson said: “We have taken back control of our laws and our destiny.”

The text of the agreement has yet to be released, but the PM claimed it was a “good deal for the whole of Europe”.

The UK is set to exit EU trading rules next Thursday – a year after officially leaving the 27 nation bloc.

It will mean big changes for business, with the UK and EU forming two separate markets, and the end of free movement.

But the trade deal will come as a major relief to many British businesses, already reeling from the impact of coronavirus, who feared disruption at the borders and the imposition of tariffs, or taxes on imports.

As the deal was announced, Mr Johnson – who had repeatedly said the UK would “prosper mightily” without a deal – tweeted a picture of himself smiling with both thumbs lifted in the air.

In a press conference in Brussels, European Commission President, Ursula von der Leyen said: “This was a long and winding road but we have got a good deal to show for it.”

She said the deal was “fair” and “balanced” and it was now “time to turn the page and look to the future”. The UK “remains a trusted partner,” she added.

At his press conference, Boris Johnson said the £668bn a year agreement would “protect jobs across this country” and “enable UK goods to be sold without tariffs, without quotas in the EU market”.

He acknowledged he had been forced to give ground on his demands on fishing.

“The EU began with I think wanting a transition period of 14 years, we wanted three years, we’ve ended up at five years,” he said.

And he said the UK had not got all it wanted on financial services, a vital part of the UK economy, but he insisted the deal was “nonetheless going to enable our dynamic City of London to get on and prosper as never before”.

The UK will no longer participate in the Erasmus student exchange scheme, which Mr Johnson said was because it is “extremely expensive” – but a British option called the Turing Scheme will provide an alternative, he added.

The UK’s chief trade negotiator Lord Frost said the full text of the free trade agreement would be published soon.

The UK Parliament will be recalled on 30 December to vote on the deal – it will also need to be ratified by the European Parliament.

Labour leader Sir Keir Starmer – who campaigned against Brexit – said his party would vote for the deal in the Commons, ensuring it will pass.

He said it was “a thin agreement” that “does not provide adequate protections” for jobs, manufacturing, financial services or workplace rights and “is not the deal the government promised”.

But with no time left to renegotiate, the only choice was between “this deal or no deal,” he added.

No deal would have “terrible consequences for this country and the Labour Party can not allow that to happen”, said the Labour leader, and that was why he had decided to back it.

Wales First Minister Mark Drakeford said a deal was better than no deal but criticised the timing just a week before the UK exits the EU single market and customs union.

Scotland’s First Minister Nicola Sturgeon said: “Brexit is happening against Scotland’s will – and there is no deal that will ever make up for what Brexit takes away from us.

“It’s time to chart our own future as an independent, European nation.”

Taoiseach (Irish prime minister) Micheál Martin said he would study the text of the deal but added: “From what we have heard today, I believe that it represents a good compromise and a balanced outcome.”

Brexit Party leader Nigel Farage – who played a leading role in the campaign to get the UK out of the EU in the 2016 referendum – told the BBC the deal was “far from perfect” and that for fisheries in particular it was a “rotten deal” – but added: “It’s a lot better off than we were five years ago.”

The head of the National Federation of Fishermen’s Organisations, Barrie Deas, said the fishing industry will be “extremely disappointed” and the UK had made “significant concessions on fish”.

Negotiations in Brussels went down to the wire over what EU fishing boats are allowed to catch in UK waters. Fishing makes up just 0.12% of the UK’s economy.

The government’s economic watchdog, the Office for Budget Responsibility, had warned that leaving without a deal would have shrunk the national income by 2% next year and led to major job losses.

There were also concerns it would lead to higher prices in the shops for many imported goods.

There are still big question marks about what the deal will mean for the rest of British business.

Firms that trade with the 27 member states have carried on as normal for the past year during the so-called transition period that kicked in when Britain left the EU.

They will still face extra paperwork when the country leaves the EU single market and customs union next week.

But the threat of tariffs – import taxes – between the UK and its biggest trading partner will be removed.