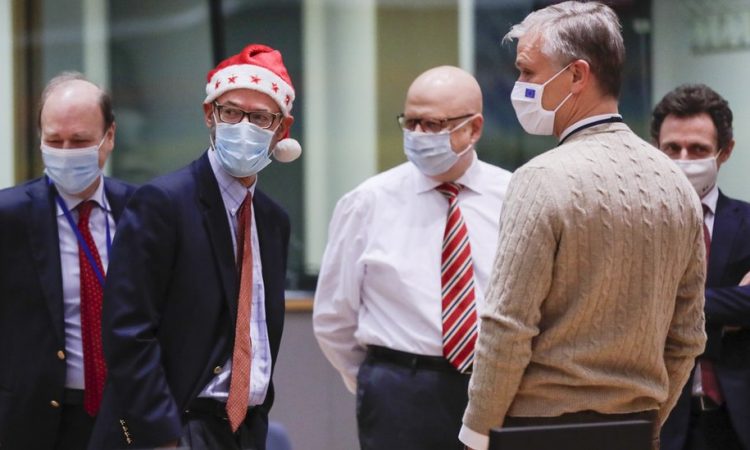 Ambassadors from the 27 EU member states have unanimously approved the EU-UK post-Brexit trade deal, paving the way for it to take effect.

The deal is likely to become law on 1 January, as the UK Parliament is expected to approve it on Wednesday.

Under EU rules it can take effect provisionally, though the European Parliament will vote on it in January.

The deal sets the framework for trade once the UK leaves the EU single market and customs union in four days’ time.

The deal, which ended nine months of negotiations, will be approved by all 27 EU governments in writing at 15:00 (14:00 GMT) on Tuesday, the German EU presidency said.

They have had three days to analyse the details of the EU-UK Trade and Co-operation Agreement, since its publication. But most of the 1,246-page document had already been seen by member states in previous weeks.

The deal ends nearly 50 years of UK membership of the bloc, covering a vast array of policies besides those governing common trade rules.

UK Prime Minister Boris Johnson tweeted that he had spoken to European Council President Charles Michel about the deal and its forthcoming ratification by EU governments.

“I welcomed the importance of the UK/EU Agreement as a new starting point for our relationship, between sovereign equals,” he said.

“We looked forward to the formal ratification of the agreement and to working together on shared priorities, such as tackling climate change.”

There was much relief that the tortuous negotiations – including last-minute haggling over fish quotas – finally ended on Christmas Eve.

The no-deal scenario would have meant reverting to World Trade Organization (WTO) rules on 1 January, notably the immediate imposition of tariffs – import taxes – and quotas on a huge range of goods. The tariffs on some food items would have been 50% or higher.

Ensures continued smooth transport links between the UK and EU, including safeguards on passenger rights

Means new paperwork and other barriers for UK businesses in Europe, including financial services, which employs more than a million people in the UK

Does little to address the needs of the UK service sector, accounting for about 80% of the UK economy

Transfers 25% of EU boats’ fishing rights in British waters to the UK fleet, over a five-and-a-half year transition period

Reduces UK access to EU programmes in various fields, including policing and education.