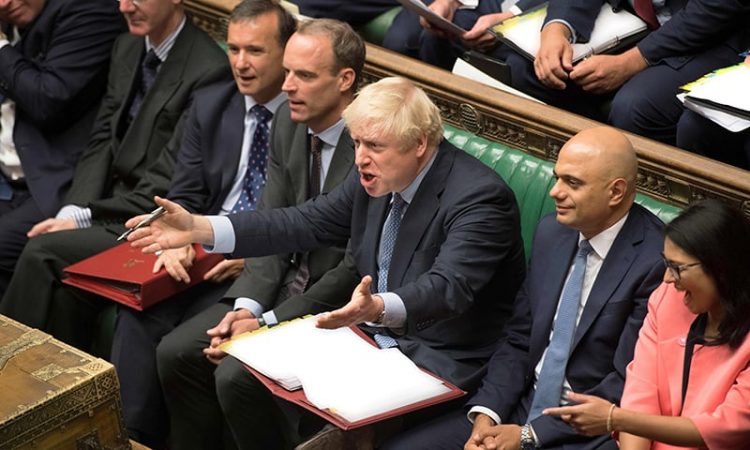 TOPSHOT - A handout photograph released by the UK Parliament shows Britain's Prime Minister Boris Johnson gesturing as he reacts to main opposition Labour Party leader Jeremy Corbyn during his first Prime Minister's Questions (PMQs) in the House of Commons in London on September 4, 2019. - Prime Minister Boris Johnson faced a fresh Brexit showdown in parliament on Wednesday after a stinging defeat over his promise to get Britain out of the European Union at any cost next month. (Photo by JESSICA TAYLOR / UK PARLIAMENT / AFP) / RESTRICTED TO EDITORIAL USE - NO USE FOR ENTERTAINMENT, SATIRICAL, ADVERTISING PURPOSES - MANDATORY CREDIT " AFP PHOTO / JESSICA TAYLOR / UK Parliament"
175views

Hours after the EU formally agreed to postpone Britain’s departure again, up to the end of January, lawmakers voted for the country’s third election in four years.

It is a gamble for Johnson, who leads a minority Conservative government, but he had nowhere left to turn after MPs rejected the Brexit terms he struck with Brussels less than two weeks ago.

His Conservatives are currently well ahead of the opposition Labour party in opinion polls, and he hopes to win a majority in the lower House of Commons in order to push through his Brexit plan.

But his failure to keep to his “do or die” pledge to leave the EU on October 31 risks a backlash.

The election outcome could have huge implications for Britain’s tortuous Brexit process, which began with the 2016 EU referendum.

Labour is committed to a new “people’s vote”, while two smaller opposition parties want to reverse Brexit and remain in the European Union.

Many Labour MPs are wary of an election, fearful of defeat under their leftist leader Jeremy Corbyn, but he swung his support behind the poll.

The other 27 EU member states earlier formally adopted Monday’s decision by envoys to delay Brexit by up to three months until the end of January, with an option for Britain to leave early if it ratifies an exit deal.

“To my British friends, The EU27 has formally adopted the extension. It may be the last one. Please make the best use of this time,” European Council President Donald Tusk said on Twitter.

The election bill will now go to the unelected upper House of Lords for debate on Wednesday, but peers are expected to back the plan, paving the way for parliament to be dissolved early next week .