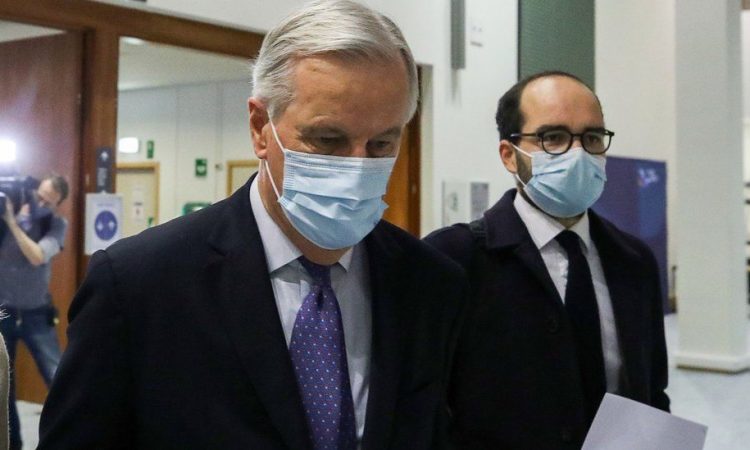 There will be no post-Brexit trade deal between the UK and EU unless there is a “substantial shift” from Brussels in the coming days, a government source has told the BBC.

It is understood there is likely to be a decision before Christmas on whether or not a deal can be reached.

The two sides have been in negotiations about how many years it will take to phase in new fisheries arrangements.

But an EU source said this was not the only remaining issue left to resolve.

“Talks are stuck,” they said.

“Not just fish. The UK has other demands and the level playing field is not sorted.”

The level playing field is a trade policy term for a set of common rules and standards that prevent businesses in one country gaining a competitive advantage over those operating in other countries.

Whitehall sources say it is increasingly likely the UK will end its post-Brexit transition period without a free trade agreement with the EU, meaning that on 1 January the two sides will rely on World Trade Organization (WTO) rules to govern exports and imports.

This could see tariffs introduced on goods being sold and bought – which may lead to increased prices for certain products.

A government source told the BBC: “We need to get any deal right and based on terms which respect what the British people voted for.

“Unfortunately, the EU are still struggling to get the flexibility needed from member states and are continuing to make demands that are incompatible with our independence.

“We cannot accept a deal that doesn’t leave us in control of our own laws or waters.

“We’re continuing to try every possible path to an agreement, but without a substantial shift from the [European] Commission we will be leaving on WTO terms on 31 December.”

The EU source said Brussels was not seeking to take control away from the UK over its waters.

“The point is what the EU can do, under the agreement, if the UK does not give access.

“So the best thing is to negotiate a stable access regime, to avoid getting to that position.”

Prime Minister Boris Johnson has vowed to keep talking but warned gaps had yet to be bridged.

Senior MEPs in the European Parliament have said they will not be “rushed” into signing off a deal on their side and want to see the text of any agreement by Sunday if they are to approve it by the end of the year.

Speaking in the European Parliament on Friday, the EU’s chief negotiator, Michel Barnier, said that while there was still a “chance” of a deal, the “path was very narrow”.

A senior EU source told the BBC’s Brussels correspondent Nick Beake: “The Member States are the EU. And as a former member state, the UK knows well that the EU negotiator is there to protect the interest of Europeans.

“We believe it is in both sides’ interest to reach a fair deal, which cannot be the case without a level playing field and sustainable arrangements for fisheries.”

The two sides have been at odds over the length of time it will take to introduce new arrangements once the UK leaves the bloc’s Common Fisheries Policy.

The UK, led by its chief negotiator, David Frost, has insisted its sovereign rights over its waters must be respected from day one and its fleets must be able to keep a much larger share of their own catch.

The EU is insisting on a much longer transition period, with guarantees on access and how catches are distributed.

The two sides are reported to have made progress in recent days on the issues of fair competition and what to do if the UK is deemed to get an unfair competitive advantage by moving away from EU rules and standards.

If a deal is reached between the two sides, it would need to be agreed by parliaments in the UK and the European Union’s member states.

UK MPs have now finished for the Christmas break, but Cabinet Office minister Michael Gove said on Thursday that they could be called back to ratify a deal in the coming days, were one to be agreed.