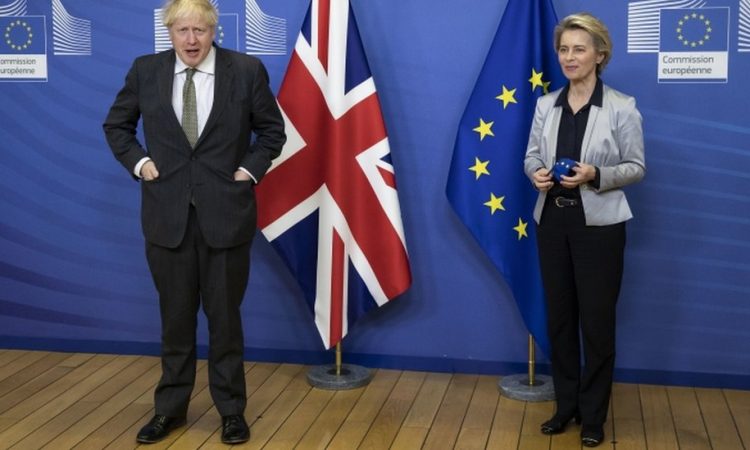 Boris Johnson and the EU have both warned they are unlikely to reach a post-Brexit trade deal by Sunday.

And the UK prime minister argued the EU needed to make a “big change” over the main sticking points on fishing rights and business competition rules.

The Sunday deadline was set by the two leaders after months of talks failed to achieve an agreement.

If a trade deal is not reached and ratified by both sides by 31 December, the UK and EU could impose taxes – tariffs – on each other’s goods.

This could lead to higher prices, among other changes.

As talks between officials continue, the EU is determined to prevent the UK from gaining what it sees as an unfair advantage of having tariff-free access to its markets, while setting its own standards on products, employment rights and business subsidies.

It is also warning that, without access to UK waters for EU fleets, UK fishermen will no longer get special access to EU markets to sell their goods.

But the UK argues that what goes on in its own waters, and its wider business rules, should be under its control as a sovereign country.

The two sides also disagree on whether the European Court of Justice should settle future UK-EU trade disputes.

The EU has rejected Mr Johnson’s request to bypass the European Commission and speak directly to French President Emmanuel Macron and Germany’s Angela Merkel about the unresolved issues.

According to EU officials, he was told discussions could only take place through the bloc’s chief negotiator, Michel Barnier.

Speaking on a visit to a vehicle battery factory in Blyth, Northumberland, Mr Johnson said: “We’re always hopeful and… our team is still out there in Brussels.

“If there’s a big offer, a big change in what they’re saying, then I must say that I’m yet to see it.”

If there was no deal, the situation would still be “wonderful for the UK”, as the country could “do exactly what we want from 1 January”, he added, even if this was “different from what we set out to achieve”.

Mrs von der Leyen, who met the prime minister in Brussels on Wednesday for three hours of talks, reportedly struck a downbeat tone when she told European national leaders the “main obstacles” to a deal remained.

She later told reporters that the two sides were still “apart on fundamental issues”.

But German Foreign Minister Heiko Maas struck a more upbeat tone, saying: “We believe finding a solution in the talks is difficult but possible.”

And Ireland’s Taoiseach Micheal Martin said there was room for the two sides to “come closer” on the major sticking points if there was the “political will” to do so.

And the EU has set out contingency measures it would take in the event of no trade agreement being reached with the UK.

It says these would ensure UK and EU air and road connections still run after the post-Brexit transition period – under which the UK has continued to follow most of Brussels’ rules – ends on 31 December.

They also allow the possibility of fishing access to each other’s waters for up to a year, or until an agreement is reached.