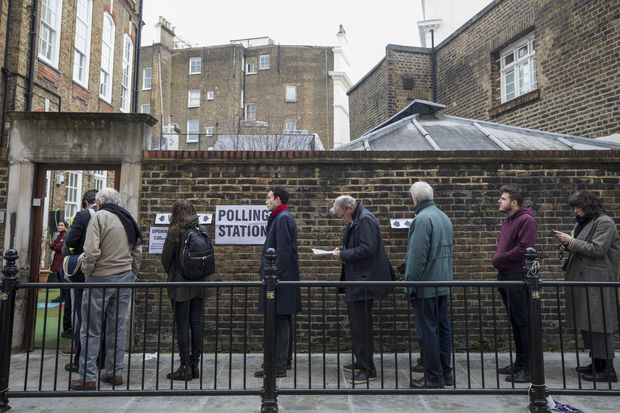 Britain voted on Thursday in a deeply divisive election that posed a historic choice between an imminent split from the European Union or another referendum that could scrap the entire Brexit process.

A decisive victory for Prime Minister Boris Johnson in the third poll in less than five years would almost certainly end Britain’s 46-year involvement in the European project at the end of next month.

The island kingdom would cut ties with its closest trading partners and enter a new era looking to regain the legal controls that Brexit supporters sought in a 2016 vote.

But a win for the opposition could still reverse Brexit and give Britain a hard-left government headed by Labour party leader Jeremy Corbyn — a veteran socialist committed to renationalisation and massive public sector spending.

Britons braved winter storms and howling winds as they lined up to cast ballots in what Johnson and Corbyn have both described as the most important vote in a generation.

“I think that the government has just been stuck for a long time and we need to get things moving now,” pensioner Naomi Buthe said after casting her ballot in central London.

Johnson voted in London with his dog Dilyn — a furry Jack Russell he picked up and kissed before a swarm of reports — while Corbyn was greeted at his polling station by supporters and a protester dressed up as the “Sesame Street” character Elmo.

But they were almost unanimously wrong about the last general election in 2017 and Johnson has said the outcome rested on a “knife edge”.

The British pound slipped in afternoon trading in expectation of exit polls at 2200 GMT. The first official results are expected to start coming in an hour later.

UK leaders have frustrated their European partners and depressed the investment climate by dragging out the divorce well past its original deadline of March 2018.

Johnson took over in July but was also stymied. The 2016 Brexit campaign’s figurehead now hopes to win a clear-cut majority that hands him a mandate make Britain the first country to leave the European bloc.

“Just imagine how wonderful it will be to settle down to a turkey dinner this Christmas with Brexit decided,” he said in a final message to voters.

Yet the complex process of unwinding ties between the single market of 27 remaining EU nations and the bloc’s second-biggest economy would run on even of the first stage of Brexit ends next month.

Brussels has indicated that Johnson’s plans to secure a comprehensive trade deal needed to secure smooth future relations before a December 2020 deadline is unrealistic.

A victory for Labour would make 70-year-old Corbyn the party’s first prime minister since Gordon Brown in 2010 — and the oldest first-time premier since Viscount Palmerston in 1855.

Corbyn’s proposal for Brexit is for Labour to strike a more EU-friendly agreement with Brussels. Voters would then choose between that deal and the option of staying in the bloc.

Brexit has turned traditional political allegiances on their head and shock results could be on the cards.

Corbyn’s hopes of heading the government would depend on support from the pro-EU Scottish National Party (SNP) and the Liberal Democrats.