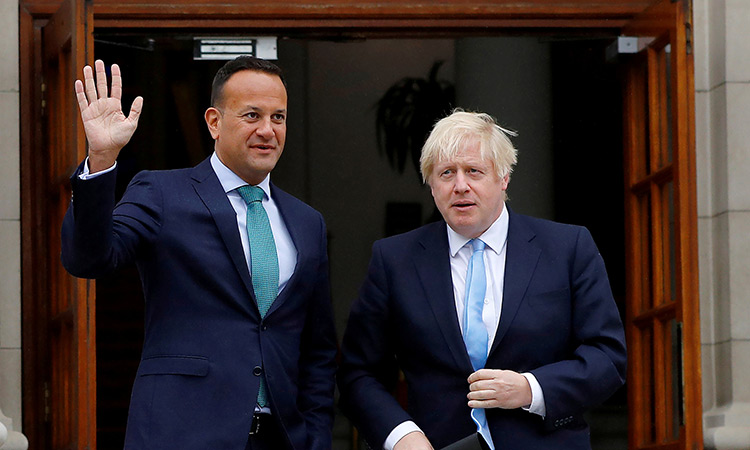 British Prime Minister Boris Johnson and his Irish counterpart Leo Varadkar met for last-ditch Brexit talks on Thursday, with just days left to strike an EU divorce deal as both sides blame each other for the deadlock.

Time is running out to sign off on any agreement at an October 17-18 European Union summit, ahead of Britain’s scheduled departure from the bloc at the end of the month after nearly five decades of membership.

Johnson has vowed Britain will leave on October 31 with or without a deal — despite MPs passing a law last month that requires him to seek another Brexit delay if he fails to secure a pact at the summit.

Johnson and Varadkar arrived in Liverpool, northwest England, according to an AFP photographer in the city, after days of recriminations over the failure to find an acceptable compromise on the key stumbling block over the Irish border.

They were later seen arriving at the exclusive Thornton Manor estate across the River Mersey on The Wirral peninsular for what Downing Street said was “a private meeting to allow both leaders and their teams to have detailed discussions”.

Varadkar told Ireland’s parliament on Wednesday that he would work “until the last moment” to get a deal, but added: “Certainly not at any cost.”

After days of trading increasingly bitter accusations of inflexibility, the diplomacy appears to be intensifying in a late bid to find a breakthrough.

“The reason the prime minister is meeting Leo Varadkar is not simply just to have a social conversation,” Business Minister Kwasi Kwarteng told BBC radio.

“They are seriously focused on trying to resolve this issue and trying to get a deal on which basis we can leave the EU.”

Johnson and Varadkar will focus their discussions on the Irish border — the key sticking point in tortuous negotiations that have dragged on for over two years.

Johnson claims his proposal provides a new way to avoid a hard border between Northern Ireland, part of the United Kingdom, and EU member Ireland after Brexit.

It would take Northern Ireland out of the EU’s customs union along with the rest of the UK, but keep it largely aligned with the bloc’s “single market” standards and regulations, subject to local consent in the province.

Brussels is adamant it will not agree to any plan that undermines the single market or leaves Ireland exposed.

Britain’s gross domestic product contracted by 0.1 percent in August, the Office for National Statistics said, in a sign that the economy is struggling in the run-up to Brexit.

Economic activity fell back after rising by 0.4 percent in July. Some economists fear the country will fall into recession in the third quarter, after GDP fell by 0.2 percent in the second quarter, given the uncertainties surrounding Brexit.

Meanwhile England’s Chief Medical Officer Sally Davies warned that people could die because of a a no-deal Brexit.