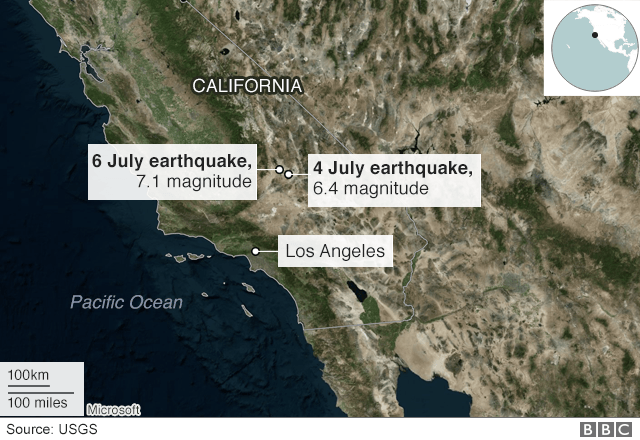 Southern California was hit by its largest earthquake in two decades Friday, a 7.1-magnitude tremor that rattled residents who were already reeling from another strong quake a day earlier.

Emergency workers and security forces were being dispatched early Saturday to the epicenter of the shallow earthquake in a remote and sparsely populated area around 150 miles (240 kilometers) northeast of Los Angeles, where it was also felt.

No deaths or serious injuries had been reported late Friday evening, but there were reports of building collapses and power outages in the town of Trona, California Office of Emergency Services director Mark Ghilarducci said.

There were “significant reports” of fires caused by gas leaks, as well as breaks to power, water and communications lines in the region, he told a press conference.

California Governor Gavin Newsom said he had requested emergency federal assistance from the White House, and state resources have been activated at their “highest level.”

Newsom later declared a state of emergency for San Bernardino County, expanding on an earlier announcement covering Kern County, near the epicenter of both the quakes this week.

A joint task force including around 200 security personnel as well as helicopters and cargo aircraft was being deployed, National Guard Major General David Baldwin said.

The quake was 11 times stronger than the 6.4-magnitude quake “foreshock” the previous day, according to the United States Geological Survey.

The two major quakes, along with multiple aftershocks, have revived fears of the “Big One” — a powerful tremor along the San Andreas Fault that could devastate major cities in Southern California.