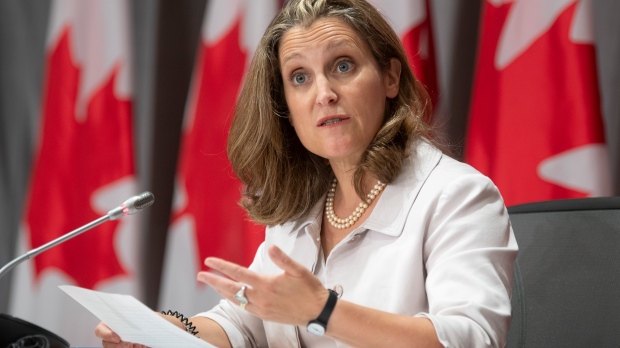 Canada on Thursday outlined a plan to move the unemployed off an emergency COVID-19 income-support program and onto an expanded employment insurance plan that requires people to look for a job to qualify.

Canada is extending the emergency support by four weeks to the end of September, and beginning on Sept. 27 it will offer unemployment benefits to hundreds of thousands of people who would not normally qualify, a senior official said.

The emergency income support program had been set to expire in August, and it is now paying 4.5 million people up to C$2,000 a month.

When it expires, more than four million Canadians are expected to apply for unemployment benefits, known as Employment Insurance, Employment Minister Carla Qualtrough said in a news conference introducing the changes.

Unlike under the emergency program, those who receive it will have to demonstrate they are looking for employment.

“We’re doing our very best to support all Canadian workers and leave no one behind,” Qualtrough said.

With unemployment at 10.9% in July, nearly double the February rate, millions of Canadians had been waiting to hear what further help would be offered.

The total cost of the new measures is estimated at about C$37 billion ($28.1 billion) over the next year, and a parliamentary vote will be needed to pass some of the changes when it reconvenes in September.

“Our government, yes, has taken on more debt so that Canadians didn’t have to take on more debt,” Finance Minister Chrystia Freeland said in her first policy announcement since taking over the job on Tuesday.

The budget deficit this fiscal year is forecast to hit C$343.2 billion, which would be the largest shortfall since World War Two.

The revamped unemployment benefits will be available to self-employed, gig workers, caregivers impacted by COVID-19 and others for one year.

Noting that more than four million Canadians who once received the emergency income support are now working, Freeland said: “I really want to thank Canadian businesses and thank Canadian workers for getting back to work.”

Liberal Prime Minister Justin Trudeau suspended parliament earlier this week and said he will ask for a confidence vote on his “long-term recovery plan” that will include the new unemployment benefits toward the end of September.

The Liberals only control a minority of seats in parliament and need opposition legislators to govern. The most obvious choice is the New Democratic Party (NDP), which competes for the same center-left voters.

The NDP had been seeking both the four-week expansion of the emergency income support and an overhaul of Canada’s Employment Insurance program.