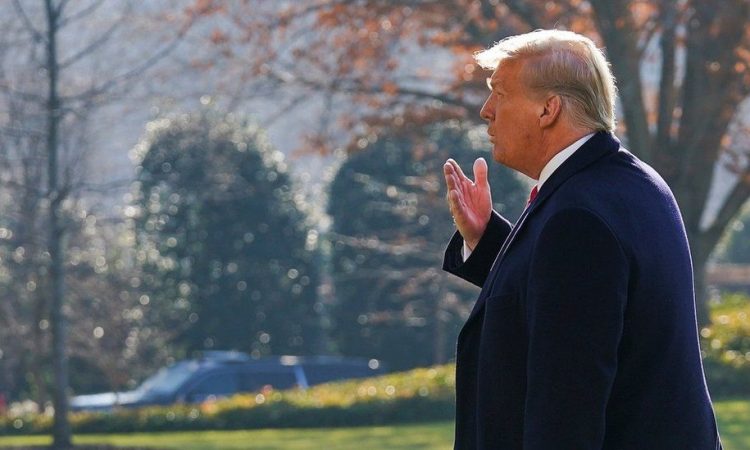 US President Donald Trump has said his speech before last week’s deadly Capitol riot, when he urged his supporters to march on Congress, was “totally appropriate”.

Mr Trump dismissed as “ridiculous” efforts by Democrats in Congress to impeach him for inciting insurrection.

He leaves office on 20 January, when President-elect Joe Biden is sworn in.

Democrats in the House of Representatives say a vote to impeach the president will happen on Wednesday.

If the vote in the House is carried, Mr Trump will become the first president in US history to be impeached twice. However, the impeachment will only lead to his removal from office if a two-thirds majority votes in favour in the Senate.

That would need the assent of a substantial number of Republicans and so far, few have shown any willingness to vote against a president from their own party.

The House will vote first to ask Vice-President Mike Pence to invoke constitutional powers to remove Mr Trump from office – an idea Mr Pence is said to oppose.

Calls for Mr Trump’s resignation, removal from office or impeachment have grown among Democrats and some Republicans in the days following the riots in Congress in which five people died.

During his speech at the rally in Washington on 6 January, Mr Trump repeated his unsubstantiated claims of voter fraud during the 3 November presidential election and urged his supporters to march on Congress.

“We’re going to walk down to the Capitol, and we’re going to cheer on our brave senators and congressmen and women, and we’re probably not going to be cheering so much for some of them, because you’ll never take back our country with weakness. You have to show strength, and you have to be strong,” he told the crowd of several thousand supporters.

He said Mr Pence should have “the courage to do what he has to do”, claiming without foundation that Mr Pence had the constitutional power to overturn the votes which were being formally tallied in Congress that day.

Dozens of people have since been detained in connection with last week’s violence, which left five people dead.

The FBI is warning of armed protests in all 50 states by right-wing extremists ahead of Mr Biden’s inauguration. Up to 15,000 National Guard troops will be deployed in Washington DC for the event.