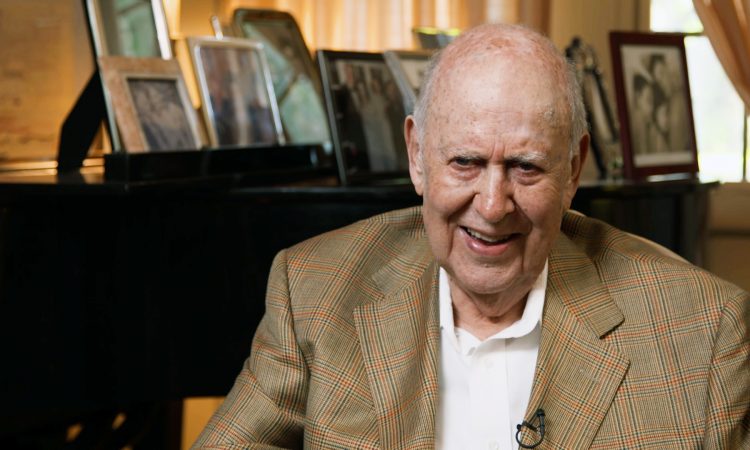 Carl Reiner, who helped create The Dick Van Dyke Show and acted in films like Ocean’s Eleven, has died aged 98.

The prolific writer, comedian, director and actor also directed several films including Steve Martin vehicles The Jerk (1979) and All of Me (1984).

He was in 2001’s Ocean’s Eleven and its two sequels as conman Saul Bloom, and had a double act with Mel Brooks.

He died of natural causes on Monday at his home in Beverly Hills, his assistant Judy Nagy confirmed.

He was a close friend of fellow sketchwriter Brooks, and the pair found a new audience with their 2000 Year Old Man routines, which spawned books and an animated TV special.

Reiner’s agent recently posted a picture of the pair supporting the Black Lives Matter movement along with Reiner’s daughter.

In his 90s, virtually every day in Beverly Hills, Reiner met with Brooks, after they both lost their wives, and they would sit on Reiner’s sofa watching movies, telling jokes and recalling a lifetime of comedy.

Reiner started acting in the US army during World War Two. In the 1950s, fellow writers on Your Show of Shows included Brooks and Neil Simon, creating a combination of silliness and satire.

A reprisal of his Alan Brady role three decades later, for a guest turn on the 1990s sitcom Mad About You, earned Reiner another Emmy.

Reiner also starred on Broadway and wrote many books, including several for children.

He was still doing voice roles in his 90s and had a key role in a documentary about people who keep busy into their tenth decade, titled If You’re Not in the Obit, Eat Breakfast.

Reiner once wrote in his book My Anecdotal Life: “Inviting people to laugh at you while you are laughing at yourself is a good thing to do. You may be the fool but you are the fool in charge.”

He leaves three children, artist Annie, artist Lucas and actor and director Rob Reiner – behind the likes of This is Spinal Tap, The Princess Bride, Stand By Me, A Few Good Men and When Harry Met Sally.