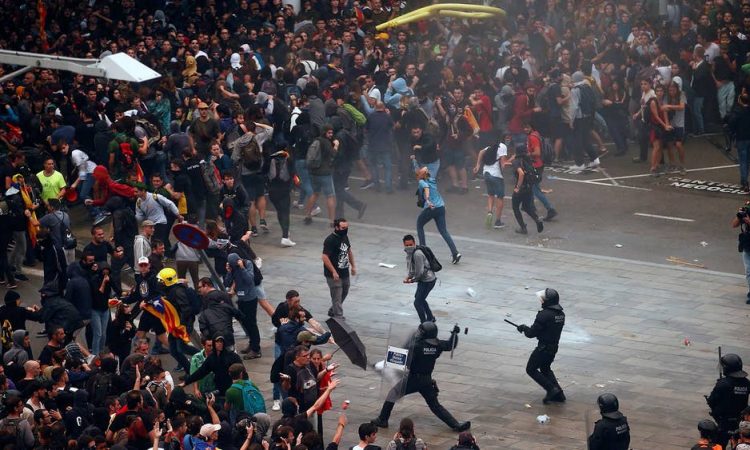 Thousands of people in Catalonia have rallied in support of the region’s independence from Spain for a second day, leading to clashes with police.

Fires were started and protesters attempted to storm government offices in Barcelona, the regional capital.

It follows the sentencing on Monday of nine Catalan separatist leaders.

A spokesperson for Catalonia’s regional government, Meritxell Budó, said they sympathised and understood the anger of the protesters.

Meanwhile, Spanish authorities say they are investigating who is co-ordinating the disruption.

Protesters have reportedly been using an app known as Tsunami Democratic, which directs them to protest sites in Catalan cities.

In Barcelona, riot police fired tear gas and charged a crowd of protesters who were trying to access government buildings.

There were three arrests, and local media reported that nine people had been treated by medical services.

Protests were also reported in the Catalan cities of Girona and Tarragona.

Pro-independence leaders – who control the Catalan regional government – say they will keep pushing for a new referendum on secession from Spain.

The protests began after nine Catalan independence leaders were handed jail sentences of between nine and 13 years by Spain’s Supreme Court on Monday.