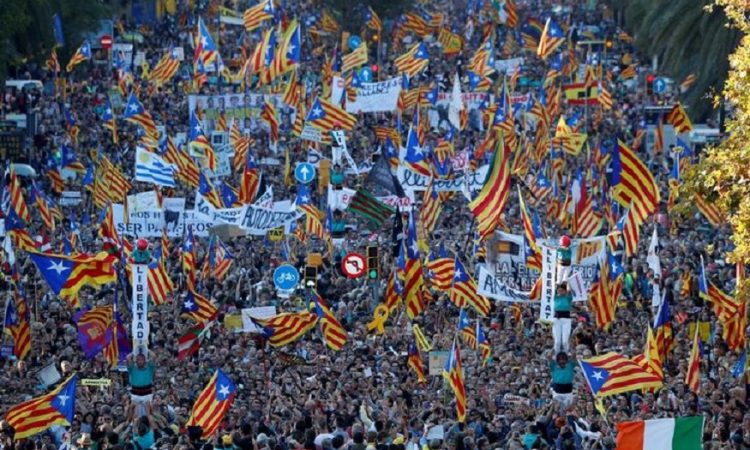 About 350,000 people have protested in Barcelona over the jailing of separatist leaders from Spain’s Catalonia region, police say.

The peaceful march was also organised to underline support for Catalonia’s independence movement.

A separate demonstration by a direct action group turned violent on Saturday evening, as protesters targeted the police headquarters.

Spanish unionists plan to hold their own mass rally in the city on Sunday.

Nine separatist leaders were jailed on 14 October by Spain’s Supreme Court for between nine and 13 years after being convicted of sedition.

The days that followed saw some of the worst violence in the history of the modern independence movement, which prides itself on its peaceful tactics.

Grassroots independence groups had urged independence supporters to fill the streets but said they were committed to peaceful protests, Reuters news agency reports.

A sea of protesters stretched from the city’s waterfront to the landmark Sagrada Familia church.

“It is time to sit down and talk,” one protester told Reuters. “I think it is time for the state to find a solution because it seems that this has no end and we are always at the same point. We have come here because we are fed up with so much repression that we have suffered from the state.”

“We have always defended non-violence,” said another. “What is happening in Barcelona is not a reflection of us, we separatists are not violent, we want our country, we want to be free.”

The day had begun with a gathering of mayors from across Catalonia to endorse the campaign for self-determination.

Mayors of 814 out of the region’s 947 local authorities gathered at the regional government’s headquarters to meet Catalan President Quim Torra.

As the mayors chanted “independence”, Mr Torra said Catalans must unite to oppose “repression” and “force the Spanish state to talk”.

Later on Saturday, a pro-independence group that favours direct action organised a protest outside the police headquarters in the city. Demonstrators threw balls, bottles and stones at riot police.

Riot police later moved to disperse the crowds, armed with shields and batons and backed by riot vans.

Projectiles were fired during the clashes and at least six people were hospitalised with injuries, according to Reuters news agency.

On Sunday, politicians from Spain’s two main centre-right parties, the Popular Party and Ciudadanos, are expected to attend the unionist rally, which comes two weeks before the Spanish general election.

Meanwhile, supporters of the far-right Vox party rallied in the Spanish capital Madrid on Saturday to hear calls for a harder line on the separatists.