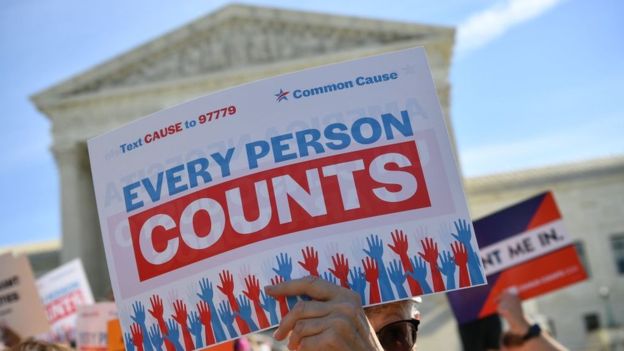 The Trump administration has dropped a controversial plan to add a citizenship question to the 2020 census, marking a major victory for civil rights groups.

It comes just days after the Supreme Court blocked efforts to include the question, ruling that the government’s justification seemed “contrived”.

The White House argued it would bolster protections for minority voters.

But opponents said it would deter immigrant households from taking part in the once-a-decade population count.

Democrats and civil rights groups feared this reluctance would lead to millions of people – mostly Latinos and African Americans – going uncounted for.

The Supreme Court had temporarily blocked the citizenship question, saying the government had not provided adequate justification for it.

But on Tuesday his administration backed down.

“I respect the Supreme Court but strongly disagree with its ruling regarding my decision to reinstate a citizenship question on the 2020 census,” Commerce Secretary Wilbur Ross said in a statement.

“The Census Bureau has started the process of printing the decennial questionnaires without the question,” he added.