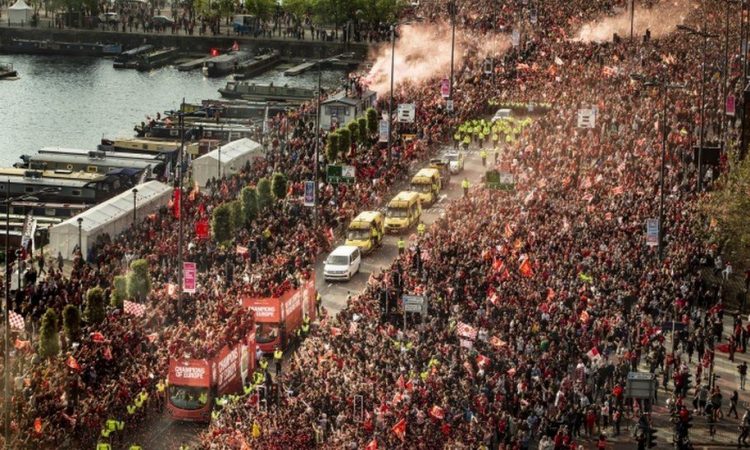 Hundreds of thousands of Liverpool fans have celebrated the club’s historic Champions League win at a parade through the city.

Jurgen Klopp’s team became champions of Europe for a sixth time when they beat Tottenham Hotspur 2-0 in Madrid.

The team arrived at Liverpool Airport ahead of the open-top bus parade.

It began at Allerton Maze and ended near the waterfront after moving slowly through a sea of red. Police estimated more than 750,000 fans turned out.

The Reds won the all-Premier League final at Madrid’s Wanda Metropolitano stadium 2-0, thanks to an early Mohamed Salah penalty and a late Divock Origi strike.

Liverpool fan Dave Williams, who was among those on the route, said: “They’ve fought so hard all the way and deserve a heroes’ welcome.

“The hairs on the back of my neck are standing on end at the thought of seeing the cup back in the city where it belongs.”

Flares trailing red smoke and sporadic outbreaks of the club’s European anthem “Allez, Allez, Allez” added to an electric atmosphere on the route.