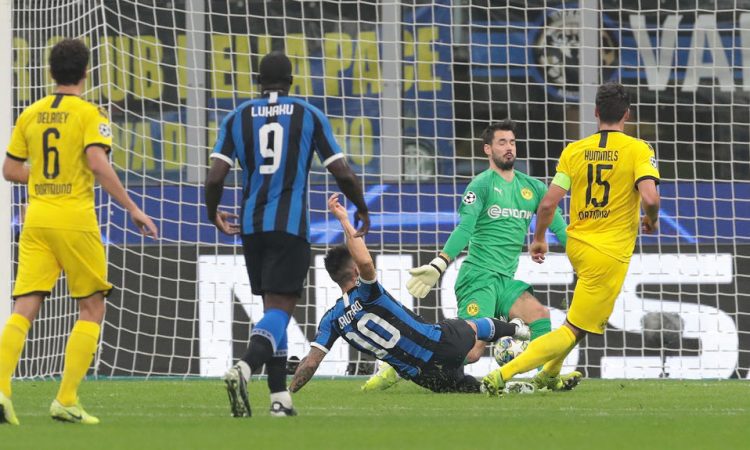 Lautaro Martinez and Antonio Candreva scored in either half to boost Inter Milan’s Champions League last 16 hopes on Wednesday with a 2-0 win over Group F rivals Borussia Dortmund.

Argentina forward Martinez continued his fine form scoring after 22 minutes in the San Siro, but missed a chance for a second from the penalty spot eight minutes from time.

Candreva sealed the three points a minute from time to move Antonio Conte’s side off the bottom of Group F having fallen 2-1 to Barcelona and being held 1-1 by Slavia Prague.

“We knew we had our backs to the wall after picking up just one point before tonight,” said Conte.

“This victory extends our expectation of qualification in a very, very difficult group.

“I’m happy especially for my players. They went to great lengths to earn a place in the Champions League last season and to experience these kinds of matches, with the full stadium and the tifosi.

“It’s now about making sure we get the result we need in Dortmund. Barcelona and Dortmund are favourites in this group, but it’s up to us now.”

Stefan de Vrij sent the ball through for Martinez in the opening half an hour with the Argentine beating the offside trap as well as goalkeeper Roman Burki from close range.

The 22-year-old’s goal, his second consecutive in the Champions League after scoring against Barcelona and fifth in four games for Inter, was confirmed by VAR.

Inter could thank captain Samir Handanovic for keeping their advantage into the break with the goalkeeper diving low to clear a Jadon Sancho angled drive.