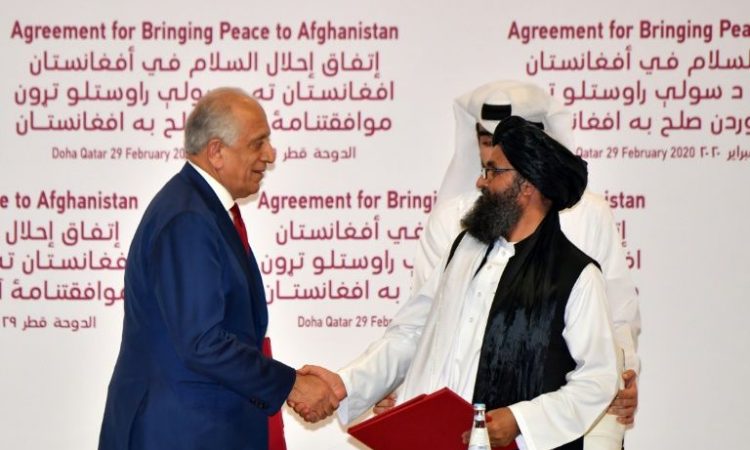 A US-Taliban deal that was supposed to kickstart peace talks between the insurgents and the Kabul government is looking flimsier by the day, with fighting raging across Afghanistan and no one sure about what comes next.

The loosely worded, four-page agreement signed February 29 in Doha was meant to set the conditions for a complete withdrawal of foreign forces from Afghanistan within just 14 months — and end the longest war in US history.

But within days of the ink drying on the deal, blood again was flowing across Afghanistan, with the Taliban striking scores of Afghan military targets and jihadist gunmen killing dozens in a Kabul attack.

US President Donald Trump on Friday even acknowledged that the Taliban could seize power after foreign forces leave — a far cry from the reassuring messaging American officials pushed in the months leading up to the accord.

The biggest sticking point so far seems to be the deal itself, which is vaguely worded and open to different interpretations.

For instance, the agreement states the Afghan government “will” release up to 5,000 Taliban prisoners before Tuesday, when peace talks between Kabul and the insurgents are supposed to start in Oslo.

Trouble is, the Afghan government is not a signatory to the deal, and a joint declaration between President Ashraf Ghani’s administration and the US calls only on Kabul to determine the “feasibility” of a mass prisoner release.

Ghani said Saturday his government was willing to free the Taliban prisoners — but only if they do not return to violence.

He did not say if a release was possible before March 10, essentially throwing the talks into limbo.

International Crisis Group analyst Andrew Watkins said the “ambiguous language and at some points outright contradictory language” between the US-Taliban deal and the US-Afghan joint statements has led to confusion.

“The reason we see ambiguity is because it would have been very difficult if not impossible to reach agreement up front,” Watkins said.

It is clear Washington’s patience with Ghani’s government is waning. The US did not congratulate him on securing a second term last month, amid widespread allegations of voter fraud.

Ghani is due to be sworn in on Monday, but so too is his bitter rival Abdullah Abdullah who wants to form a rival government.

And in a scenario that would have been unthinkable after the September 11, 2001 attacks that triggered the US invasion of Afghanistan, Washington seems determined to downplay acts of Taliban violence and lend credence to its longtime foe’s motives.

Secretary of State Mike Pompeo last week said the senior Taliban leadership was “working diligently to reduce violence”, while also appearing to take a veiled swipe at the Ghani government for representing only “narrow interests”.

Trump even boasted about a “very good” phone call with top Taliban leader Mullah Baradar, while his daughter Ivanka took to social media to post a few lines by the Sufi poet Rumi about the serenity of reconciliation.

The US president also signalled that America’s commitment to Afghanistan’s security came with an expiry date.

“Countries have to take care of themselves,” Trump said Friday. “You can only hold someone’s hand for so long.”

Scott Smith, expert on Afghanistan at the US Institute of Peace, said the US is fully aware that Ghani believes it is legitimising the Taliban.

“The message is that (the US) priority is the deal, and we are willing to pay the cost of this difference in legitimacy in order to try to convince you that we’re serious about it,” Smith told AFP.

Since the deal signing, the Taliban have launched dozens of operations across Afghanistan.

The Pentagon was quick to play down the widespread fighting, with General Mark Milley, Chairman of the Joint Chiefs of Staff, classifying the violence as “small, low level attacks, out on checkpoints”.

Although Afghanistan enjoyed a partial truce in the week leading up to the deal, hopes it would continue as Kabul and the Taliban prepared for peace talks have been dashed.

And the agreement stipulates only that a ceasefire will be an “item” on the agenda of future talks, highlighting Washington’s failure to extract any promise from the Taliban to reduce violence during the interim.

On Saturday, the Taliban released a statement saying their “armed jihad” could continue “until the occupation is completely severed from its roots and an Islamic government formed”.

“Unfortunately the renewed fighting against the government signals that the Taliban are not interested in a negotiated settlement,” said professor Michael Semple at the Mitchell Institute at Queen’s University Belfast.

Worsening the chaos, the Islamic State group claimed a mass shooting at a political rally in Kabul on Friday that killed 32 people.