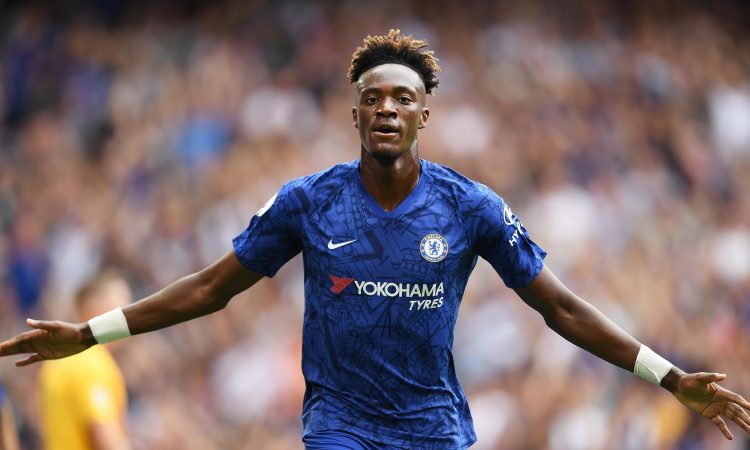 Frank Lampard has backed Tammy Abraham to score regularly for England after his impressive start to the season for Chelsea was rewarded with a call-up to the national squad.

The 22-year-old was named in Gareth Southgate’s squad for this month’s Euro 2020 qualifiers in the Czech Republic and Bulgaria alongside Blues teammates Ross Barkley, Mason Mount and Fikayo Tomori on Thursday.

Abraham has eight goals in 10 appearances this season and Chelsea manager Lampard is pleased to see him back in the England squad after two previous friendly appearances in 2017.

“Everyone knows his form’s really good. I think he’s been in the equation probably for Gareth all season because of how he’s played and it’s a natural progression for him,” Lampard said at his pre-match press conference on Friday.

“I’m delighted for him. I know he’s a proud lad, as he should be proud to get a call-up.”

Abraham had flirted with switching his international allegiance to Nigeria, a country he qualifies for through his father, but will be committed to England if he appears in either forthcoming qualifier.

Lampard, whose Chelsea side travel to Southampton on Sunday, was cautious not to load too much pressure on the young forward’s shoulders.

“And there’s competition there. When he steps into the squad he’ll see that there are great strikers in that squad already around him so it’s a good challenge for Tammy.”

While Abraham’s selection was expected, especially with the forward eligible for Nigeria, the inclusion of 21-year-old defender Tomori was more of a surprise.

Lampard, who was Derby boss last season, described the former Derby loanee as a “dream to work with” during the past 15 months they have spent together.

“It’s a great step up and it’s in his hands to go there and show what he shows us every day,” he said.