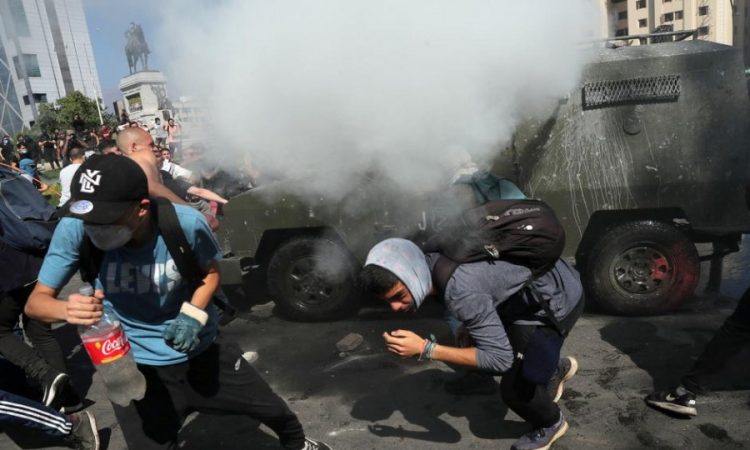 The military and police used tear gas and water cannon against protesters and a curfew was imposed in major cities.

A state of emergency already in place in Santiago is to be extended to cities in the country’s north and south.

The unrest, sparked by a now suspended metro fare hike, has widened to reflect anger over living costs and inequality.

There is set to be major disruption on Monday with many banks, schools and shops expected to remain closed.

Firefighters say they found five bodies inside the garment factory burned by rioters in a suburb of Santiago. Earlier reports suggested three others had died in a supermarket fire in Santiago on Saturday.

Interior Minister Andrés Chadwick said at least seven people had died in incidents related to the protests, without giving details.

There had been 70 “serious incidents of violence”, including 40 lootings of supermarkets and other businesses. Two people also suffered gunshot wounds after a clash with police, officials say.

“We’re facing a real escalation that is undoubtedly organised to cause serious damage to our country and the lives of each of its citizens,” the minister said.

Some 10,500 police and soldiers have been deployed to the streets, he added, while officials report more than 1,400 arrests.

In several cities on Sunday, protesters set more buses on fire, smashed up metro stations and clashed with riot police. A night-time curfew was imposed in the areas of Santiago, Valparaíso, Coquimbo and Biobío.

A state of emergency will be applied to Antofagasta, Valparaíso, Valdivia, Chillán, Talca, Temuco and Punta Arenas, allowing authorities to restrict people’s freedom of movement and their right to assembly.