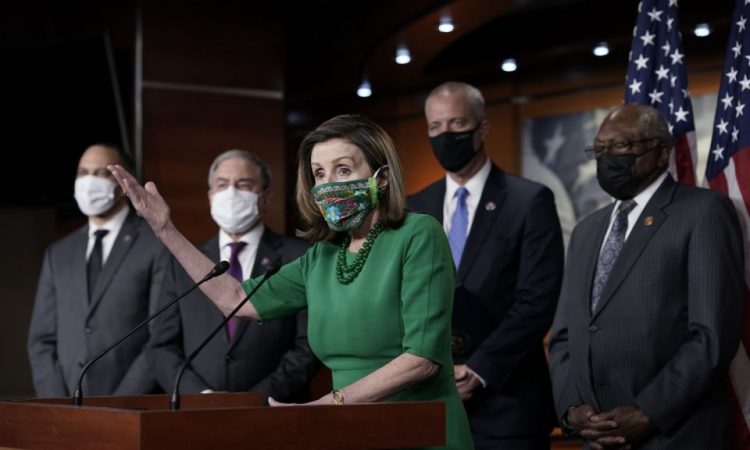 Speaker of the House Nancy Pelosi, D-Calif., meets with reporters before the House votes to pass a $1.9 trillion pandemic relief package, during a news conference at the Capitol in Washington, Friday, Feb. 26, 2021. (AP Photo/J. Scott Applewhite)
125views

President Joe Biden’s $1.9tn (£1.4tn) relief plan to help Americans during the Covid pandemic has been approved in the House of Representatives.

The vote was along partisan lines. Two Democrats joined Republicans – who see it as too expensive – in opposing it.

The bill must now go to the evenly-divided Senate, which has already blocked a key element – doubling the US minimum wage to $15 an hour.

The package seeks to boost vaccinations and testing, and stabilise the economy.

The cash would be extended as emergency financial aid to households, small businesses and state governments. Unemployment is close to 10%, with some 10 million jobs lost in the pandemic.

The vote comes in the same week the US passed 500,000 coronavirus-related deaths – the largest figure of any nation in the world.

Joe Biden had appealed for bipartisan unity when he took office last month, but there was little on show in the early hours of Saturday when the Democrats scraped the bill through on a 219 to 212 vote.

President Biden has championed what he calls the American Rescue Plan as a way to help struggling Americans through Covid-19.

But Republicans say the plan is unnecessarily large and stuffed with Democratic priorities unrelated to the pandemic.

The divisions were reflected by the representatives.

The leader of the Republicans in the House, Kevin McCarthy, said: “Democrats are so embarrassed by all the non-Covid waste in this bill that they are jamming it through in the dead of night.”

It’s the third major US spending package of the pandemic, and actually not quite as big as Donald Trump’s $2tn last March.

The key elements include:

A $1,400 cheque per person, although payments phase out for higher incomes

Financial support for schools and universities to help them reopen

Grants for small businesses and other targeted industries

But on Thursday, Elizabeth MacDonough, the non-partisan Senate parliamentarian – who interprets its rules – said that raising the minimum wage would violate the budgetary limits allowed in this kind of measure.

The bill that passed in the House does still include the increase and it remains unclear how the issue can be resolved.

The minimum wage rise remains a key Democrat goal, particularly for the party’s progressive wing, and some top Democrats are considering a measure to penalise employers who pay less than $15 an hour.

Republicans argue the minimum wage increase would be too heavy a toll on firms struggling to rebuild following the Covid-19 outbreak.

Mr McCarthy has said the only way out of Covid is to “fully reopen our economy”.

The package goes to the Senate – spilt evenly between Democrats and Republicans 50-50 – probably next week. The rules of the Senate do allow a reconciliation bill like this to be passed on a simple majority, rather than 60-40.

In the event of a tie, Democrat Vice-President Kamala Harris gets the deciding vote.

Traditionally, the text the Senate agrees then has to be reconciled with the House bill. The single bill is voted on again and passed to the president for signing.

Democrats are confident a bill will go through, but the minimum wage issue is problematic.

Senator Bernie Sanders was among those angry that “archaic” procedural rules were blocking the increase.

House Speaker Nancy Pelosi has said a bill will still pass, even if this section is taken out by the Senate.

Work will still need to be done with lawmakers to get a version of the bill over the line. The Democrats want it done by 14 March at the latest.