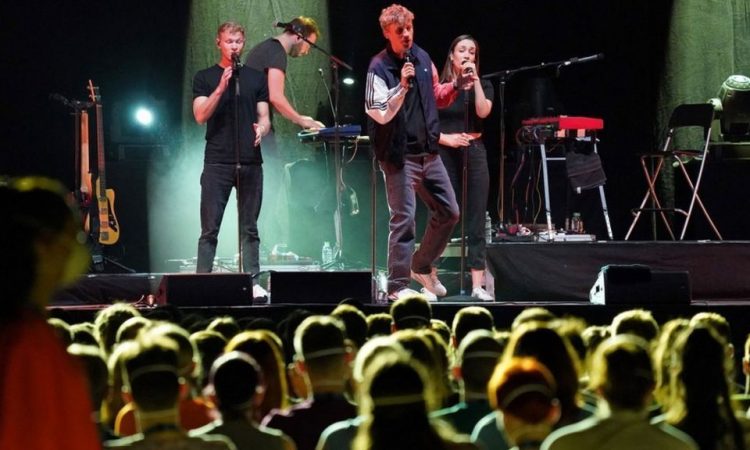 Three pop concerts are being staged on one day in Germany to enable scientists to investigate the risks of such mass indoor events during the pandemic.

Some 4,000 healthy volunteers aged between 18 and 50 were urged to sign up for Saturday’s study in Leipzig, carried out by Halle University.

The study came as Germany recorded its highest number of Covid-19 infections since the end of April.

More than 2,000 cases were recorded in the last 24 hours, bringing the total number of cases to 232,082, the Robert Koch Institute reported. The concert study, called Restart-19, was created “to investigate the conditions under which such events can be carried out despite the pandemic”, researchers said.

Scientists planned to run three different scenarios with some 4,000 visitors at the Quarterback Immobilien Arena in Leipzig during the course of Saturday.

The first aims to simulate an event before the pandemic; the second with greater hygiene and some social distancing; and the third with half the numbers and with each person standing 1.5m apart.

Each staged scenario involves arrivals and departures from the stadium and performances by Tim Bendzko “in order to depict spectator behaviour as realistically as possible.”

All participants are being tested for Covid-19, and given face masks and tracking devices to measure their distancing. Exactly how many volunteers came forward to participate remains unclear.

Researchers are reportedly using fluorescent disinfectants to track what surfaces audience members touch the most. The project received 990,000 euros (£892,000, $1.17m) funding from the states of Saxony-Anhalt and Saxony with the aim of helping to pave the way for the resumption of major indoor sporting and music events by ascertaining realistic levels of risk.

“The corona pandemic is paralyzing the event industry,” Saxony-Anhalt’s Minister of Economics and Science, Prof Armin Willingmann, said before the event.

“As long as there is a risk of infection, major concerts, trade fairs and sporting events cannot take place. This is why it is so important to find out which technical and organisational conditions can effectively minimise the risks.”