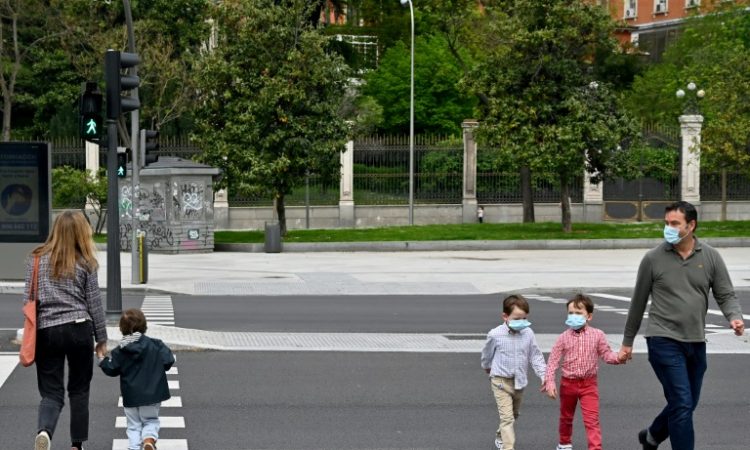 Spanish children were allowed outside on Sunday for the first time in six weeks as countries eased lockdown measures in a bid to slowly reopen economies gutted by the coronavirus pandemic that has infected nearly three million people worldwide.

Governments from France to Italy and the United States are starting to peel back severe restrictions that have kept more than half of humanity indoors for weeks on end.

Coronavirus cases around the world topped 2.9 million Sunday and deaths hit nearly 203,000 people, well over half of them in Europe, according to an AFP tally.

The daily toll in Western countries appeared to be levelling off and even falling in hard-hit countries, with numbers out of Italy, Spain and France stabilising in recent days.

Governments are plotting a gradual reversal of lockdown measures to avoid a sudden rush back to normal life — and the risk of a second wave of infections — amid warnings from the World Health Organization that recovered people might not be immune to reinfection.

Spanish families embraced new rules allowing children outside for the first time since mid-March, with kids hopping on bicycles and scooters on the streets of Madrid — some wearing small masks and gloves.

“They are super excited, very, very impatient. They were up at 6:30 am, saying ‘We are going out, We are going out!’,” Inmaculada Paredes told AFP, readying to take her seven- and four-year-old kids outdoors.

Six-year-old Ricardo said it was “very good” to be out after a runaround with his younger sister in the city.

“We played hide and seek, we raced. We found a ladybug that was lost and we put it in among the ants,” he told AFP.

Under the revised rules, children are allowed out once per day between 9:00 am and 9:00 pm, but cannot venture more than one kilometre (0.6 miles) from their homes.

The new rules were rolled out as the death toll in the hard-hit country dropped to 288 people on Sunday, the lowest since March 30.

US state of Georgia allowed thousands of businesses to resume operations, from hairdressers to bowling alleys.

“How long are we supposed to imprison ourselves?” said 30-year-old Mackenzie Scharf, one of many in Georgia embracing the return to something resembling normalcy.

“This is much safer than going grocery shopping,” she told AFP on the beach at Tybee Island, where her five-year-old son flew a kite under a cloudless sky.

US President Donald Trump has repeatedly said he wants to resume business in the world’s biggest economy, even as medical advisors have cautioned against easing lockdown too soon or too fast.

The US leader faced a fresh volley of criticism after suggesting that coronavirus could be treated by shining ultraviolet light inside patients’ bodies, or with injections of household disinfectant.

He lashed out at the media on Twitter, accusing journalists of posing hostile questions, and suggested his daily coronavirus briefings were not worth his time.

“They get record ratings, & the American people get nothing but Fake News. Not worth the time & effort!,” Trump wrote.