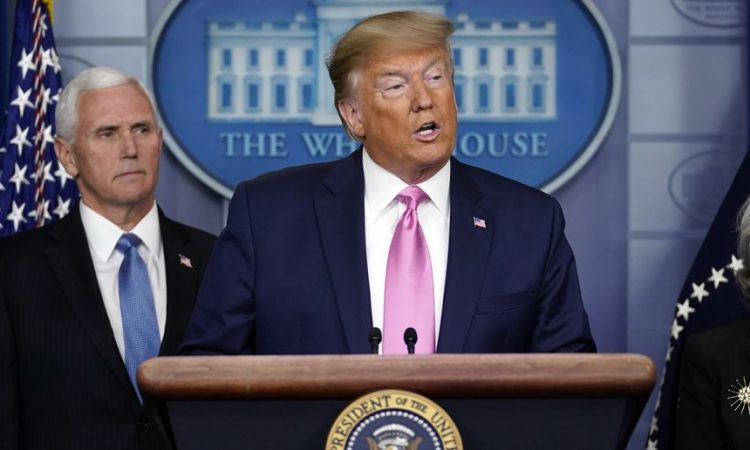 President Donald Trump urged Americans not to panic over the novel coronavirus Saturday after the first death on US soil was confirmed, even as France ramped up its security measures by cancelling all mass gatherings.

The virus has now hit 62 countries across the globe, prompting the World Health Organization to raise its risk assessment to its highest level.

Worldwide, nearly 3,000 people have been killed and about 87,000 infected since it was first detected in the central Chinese city of Wuhan late last year.

Its rapid international spread in the past week caused stock markets to plunge to their lowest levels since the 2008 financial crisis over fears the disease could wreak havoc on the world economy.

But global attention shifted Saturday to the United States, after authorities in the state of Washington confirmed the first fatality on American soil — and President Donald Trump hastily called a press conference to address fears.

“We’ve taken the most aggressive actions to confront the coronavirus,” Trump told reporters at the White House.

“Our country is prepared for any circumstance. (…) There is no reason to panic at all.”

The fatality occurred in Washington state’s King County, which includes Seattle, a city of more than 700,000 people, health officials said.

The victim was in his 50s and had “underlying health conditions,” officials said, as they also announced a possible outbreak in a Washington state nursing home, where a health worker and a resident in her 70s were both confirmed sick with the virus.

Other residents and staff are “ill with respiratory symptoms or hospitalized with pneumonia of unknown cause,” the Centers for Disease Control and Prevention (CDC) said.

The death and two confrimed Washington state cases all involved patients who had not traveled overseas or come in contact with anyone known to be ill, indicating the virus was spreading in the United States.

“But it’s important to remember, for the vast majority of individuals who contract the novel coronavirus, they will experience mild to moderate symptoms.”

Although the vast majority of infections have been in China, more daily cases are now logged outside the country. South Korea, Italy and Iran have emerged as hotspots.

The United States imposed new restrictions on anyone who has traveled in the last two weeks to Iran, and urged Americans not to visit hard-hit areas of Italy and South Korea.

With the virus spreading quickly in some countries, France on Saturday cancelled gatherings of 5,000 people or more.

The restrictions came after 16 new cases were confirmed there Saturday, bringing the country’s total to 73.

Sunday’s Paris half-marathon and an agricultural symposium were among the events that were axed.

South Korea, which has the most infected people outside China, reported 376 new cases on Sunday, bringing its total to 3,526.

“The government is now waging all-out responses after raising the crisis alert to the highest level,” President Moon Jae-in said.

Italy, the hotspot of the outbreak in Europe, saw a jump in new cases on Saturday, with its number of infections exceeding 1,000 and the death toll jumping by eight to 29.

The outbreak forced the postponement of five matches in Italy’s Serie A soccer league, including the heavyweight duel between champions Juventus and Inter Milan.

In recent days, the epidemic spread to sub-Saharan Africa, while Qatar, Ecuador, Luxembourg and Ireland all confirmed their first cases on Saturday.

China on Sunday announced 35 more deaths — taking the toll in the country to 2,870 — a drop from the 47 fatalities reported a day earlier.

While still in the hundreds, the figure is far lower than the huge daily increases China recorded over the last two months.

Meanwhile, official data released in China on Saturday showed the extent of the damage caused to the world’s second-largest economy, with manufacturing activity falling to its lowest level on record as key industries ground to a standstill under drastic containment measures.

Beijing has taken drastic steps to contain the virus, curbing the movement of people, temporarily closing factories across the country and quarantining central Hubei province, a key industrial region where the epidemic first appeared.