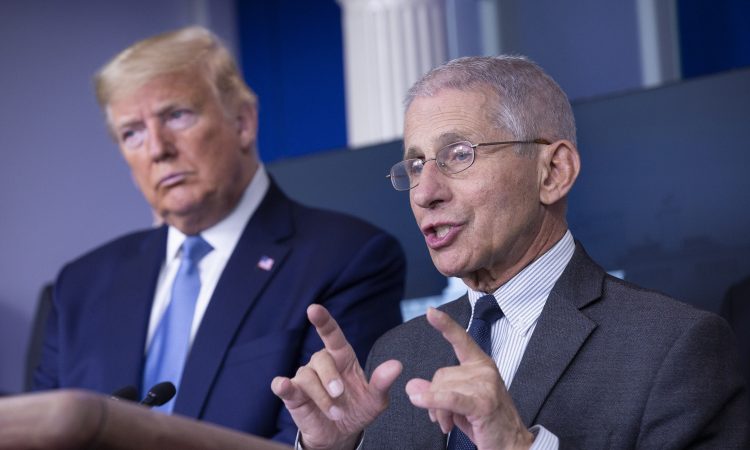 US infectious disease chief Dr Anthony Fauci is being targeted by the Trump administration as tensions rise between the health expert and the president.

The White House has been increasingly critical of Dr Fauci, and on Sunday, an official shared a list detailing past apparent erroneous comments.

Dr Fauci’s changing advice on masks and remarks on Covid-19’s severity are among the points from the White House.

The move to undercut him comes as the US continues to see surges in Covid-19.

There are over 3.3 million cases confirmed and more than 135,000 deaths nationwide, according to Johns Hopkins University.

Dr Fauci has contradicted President Donald Trump’s comments on the pandemic a number of times, pushing back on the president’s claims that the outbreak is improving and attributing hasty state re-openings to the recent surges.

The White House memo leaked over the weekend had noted “several White House officials are concerned about the number of times Dr Fauci has been wrong on things”.

Though the White House said Dr Fauci and Mr Trump have a “good working relationship” on Monday, Trump adviser Peter Navarro told CBS News: “When you ask me if I listen to Dr Fauci’s advice, my answer is only with caution.”

White House Press Secretary Kayleigh McEnany on Monday told reporters the memo was a “direct response to a direct question” from the Washington Post.

Echoing the contents of the memo earlier, Mr Navarro, an economic adviser to Mr Trump, said Dr Fauci “has been wrong about everything I have ever interacted with him on”.

“When I warned in late January in a memo of a possibly deadly pandemic, Fauci was telling the media not to worry,” he said.

Mr Navarro said Dr Fauci fought against Mr Trump’s “courageous decision” to halt flights from China, initially said the virus was “low-risk”, “flip-flopped on the use of masks” and said there was “only anecdotal evidence” regarding hydroxychloroquine as a treatment.

“Now Fauci is saying that a falling mortality rate doesn’t matter when it is the single most important statistic to help guide the pace of our economic reopening.”

Admiral Brett Giroir, assistant US health secretary and member of the virus task force, told NBC News on Sunday that while he respects Dr Fauci, he is not always right.

“Dr Fauci is not 100% right and he also doesn’t necessarily, he admits that, have the whole national interest in mind. He looks at it from a very narrow public health point of view.”

Mr Trump on Monday retweeted comments from a game show host accusing “everyone”, including the US Centers for Disease Control (CDC) of lying about the coronavirus.

Ms McEnany later told reporters Mr Trump still had confidence in the CDC and the tweet was meant to express his displeasure with “some rogue individuals” who leaked planning documents.

Last week, the president told Fox News Dr Fauci was “a nice man but he’s made a lot of mistakes”.

As cases and deaths continue to rise in a number of states, Mr Trump has been accused by critics of politicising health issues, including wearing masks.

Mr Trump has also clashed with the World Health Organization (WHO), accusing the body of mismanaging the pandemic when it began and failing to make “greatly needed reforms”.

On 7 July, he formally began to pull the US out of the WHO and said funding would be redirected.