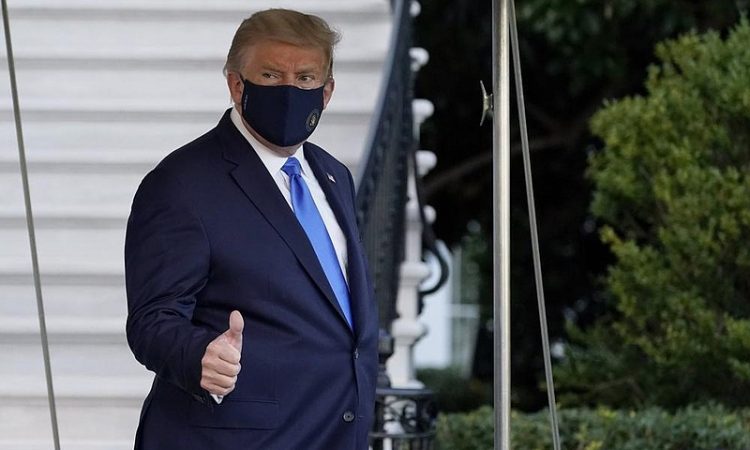 US President Donald Trump is “very well” as he spends the weekend in a hospital after testing positive for coronavirus, his doctor says.

Dr Sean Conley said the president was not on extra oxygen for now and had been fever-free for 24 hours.

But conflicting reports have emerged suggesting concern over Mr Trump’s health, the time he was diagnosed or whether he was ever given oxygen.

In exactly one month, Mr Trump faces Joe Biden in the presidential election.

The positive diagnosis, made public by the president in a tweet on Friday, has upended his campaign and also cast doubt on his attempt to get a new Supreme Court judge confirmed before polling day.

The president is expected to remain at the Walter Reed National Military Medical Center close to Washington DC for several days. Dr Conley said he was “cautiously optimistic” but that he could not give a timetable for his discharge.

But the doctors’ assessment was contradicted by a person familiar with the president’s condition who said some of his vital signs over the last 24 hours were “very concerning” and that the next 48 hours would be critical. The source said “we’re still not on a clear path to a full recovery”.

The president, being 74, a man and someone categorised as obese, is in a higher-risk category for Covid-19. He has so far been treated with an experimental drug cocktail injection and the antiviral medication remdesivir.

Writing on Twitter later, the president said: “Doctors, nurses and all at the great Walter Reed Medical Center, and others from likewise incredible institutions who have joined them, are amazing… With their help, I am feeling well!

Speaking at a news conference on Saturday morning, Dr Conley refused to say whether the president had ever been on oxygen despite being repeatedly questioned. “None at this moment and yesterday with the team, while we were all here, he was not on oxygen”.

Shortly afterwards, the Associated Press and New York Times reported, quoting unnamed officials, that doctors had given the president supplemental oxygen at the White House on Friday before deciding to transfer him to Walter Reed.

Dr Conley also said some of the president’s symptoms including a mild cough and nasal congestion were “now resolving and improving”, adding: “At this time the team and I are extremely happy with the progress the president has made”.

There was also some confusion after he said the team were “72 hours” into the president’s positive diagnosis which, if confirmed, would suggest Mr Trump attended two large campaign events possibly knowing he was infected. A White House official later clarified the doctor meant to say “it’s day three, not 72 hours”.

Another doctor, Sean Dooley, said Mr Trump was in “exceptionally good spirits” having said earlier: “I feel like I could walk out of here today”.

Mr Trump remains in charge. Vice-President Mike Pence, to whom under the constitution the president would transfer power temporarily should he become too ill to carry out his duties, tested negative.