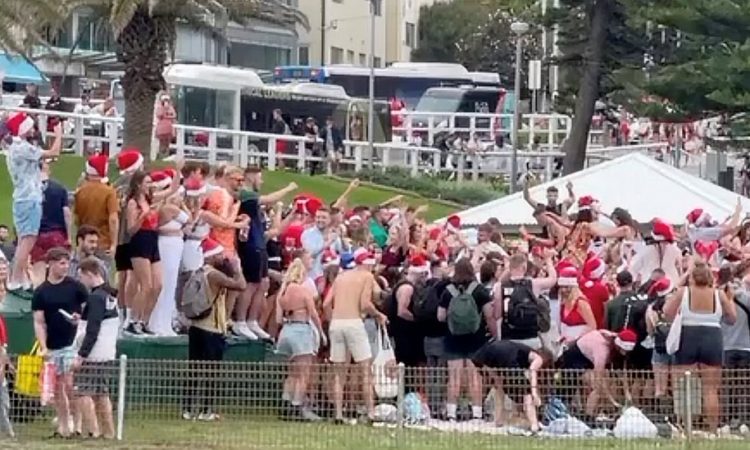 Australia’s immigration minister has said that backpackers and other foreign visitors caught flouting public health restrictions could be deported.

Alex Hawke said he was shocked by scenes from Sydney’s Bronte Beach on Christmas Day.

Videos of the gathering shared on social media showed hordes of young revellers singing and dancing in breach of coronavirus regulations.

Some eyewitnesses said many of those present were British.

Sydney is battling a new outbreak after months of no local cases.

The virus’s re-appearance a week before Christmas sparked a swift re-introduction of restrictions in the city, including clampdowns on holiday gatherings and a lockdown of the worst-affected region, the Northern Beaches.

The outbreak has already grown to 129 cases.

“If somebody is threatening public safety or health, their visa can be cancelled and revoked,” Mr Hawke told a Sydney radio station.

He said he had asked the federal Department of Home Affairs to work with New South Wales (NSW) state authorities in the lead up to New Year’s Day to make sure that anyone caught “doing the wrong thing” would have their visa status examined by the federal government.

None of the Bronte partygoers were fined or otherwise penalised, police said.

Australia closed its borders to almost everyone except returning citizens or permanent residents and their families in March.

The government said in April that there were over two million people in the country on temporary visas at that time.

On Christmas Day, hundreds of unmasked young people were seen drinking, dancing and singing in the park next to Bronte Beach, which neighbours the famous Bondi Beach in east Sydney.

Holiday parties among backpackers in the tourist hotspot have been a common occurrence in other years.

Witnesses told the BBC they believed the majority of revellers were from the UK or “not Australian”.

“You could hear lots of clearly English accents, and several people were wearing the white English football jerseys,” said Peter Hannam, a local journalist who had passed the crowds while on a walk with his family.

“We had to move through them on our path and the crowd was sort of pulsating… and well we thought we don’t really want to hang around here because it doesn’t look very safe.”

He said a police squad and helicopter later arrived at the scene. Video shared on social media showed lingering groups carrying on with their activities as police circulated and tried to disperse people.

NSW Police told the BBC that no penalties were issued to those attending the gathering.

“It was an operational decision at the time, there being so many people to deal with,” said NSW Police spokesman Scott Willis. “It’s not always possible to take action against everyone there.”

Police issued fines to other rule breakers on Christmas Day including guests at a house party in Bondi which was over capacity, and to a woman who drove out of her locked-down suburb for a Christmas visit.

Reports of the gathering have sparked widespread community anger.

Many Australians vented frustrations online, deeming the behaviour “selfish” in contrast to those who endured lockdown restrictions, or were otherwise separated from family over Christmas.

“It is absolutely appalling to see what was clearly a group of people, a large gathering of people, who didn’t give a damn about the rest of Sydney,” he told reporters on Saturday.

“Many of those backpackers come here to Australia and are enjoying the relative freedoms we have here,” Mr Hazzard was reported as saying by the Sydney Morning Herald.

“If they were in Europe right now, most of them would be in lockdown and not even allowed outside the front door.”

Others have also criticised the police response, arguing the partygoers had been let off far too easily, especially given how police have dealt with other transgressions.

During a heavily-policed lockdown earlier this year, NSW Police issued A$1,000 (£560) fines for violations such as people venturing out of their lockdown zones and lingering in parks. In one case, a man was fined for eating a kebab on a bench – in breach of a stay-at-home order.

Critics say the laws – which are applied with police discretion – have disproportionately affected poorer, marginalised communities.

NSW Police declined to comment on these allegations. Similar criticism was also levelled at Victoria Police during Melbourne’s lengthy lockdown.