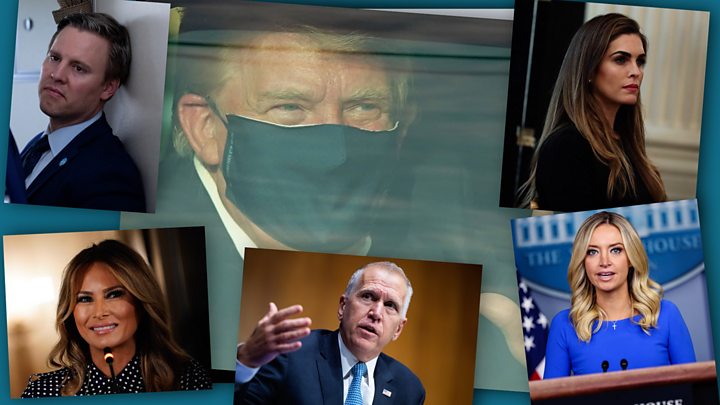 Covid-19 is spreading further among those around US President Donald Trump, with White House adviser Stephen Miller and a top military official infected.

Mr Miller, who has been self-isolating for the past five days, confirmed on Tuesday that he had tested positive.

Meanwhile, Democratic candidate Joe Biden has said Mr Trump should not debate him if he is still infected.

Speaking about their scheduled second encounter in Miami, Florida, on 15 October, he said he would be guided by medical experts.

“I think if he still has Covid, we shouldn’t have a debate,” he said.

Mr Trump returned to work in the White House from hospital on Monday despite being diagnosed with the disease only last week.

While at Walter Reed Medical Center, he was treated with dexamethasone – a steroid medication usually given to severe and critical Covid-19 patients – and supplemental oxygen.

The Trump adviser said he was in self-isolation after “testing negative every day” until Tuesday.

He had been closely involved with the president before the latter fell ill, attending a meeting on 27 September to prepare for the first presidential debate in Cleveland, Ohio, and later taking flights with him on Air Force One, the New York Times reports.

His wife, Katie Miller, who is Vice-President Mike Pence’s spokeswoman, contracted the virus back in May and later recovered.

The White House denied that coronavirus had caused Mrs Glosser’s death, saying in a statement she had “died peacefully in her sleep from old age”.

But Mr Miller’s uncle produced a death certificate listing “respiratory arrest” and Covid-19 as “a condition leading” to the cause of Mrs Glosser’s death.

Mr Miller – who writes the president’s speeches – is known for his hardline views on immigration.

While officials who attended meetings with Adm Ray last week are now quarantining, none have so far tested positive or exhibited symptoms, the Pentagon said.

Other White House officials have tested positive for coronavirus in recent days.

The Coast Guard said Adm Ray had tested positive on Monday and was isolating at home. It added that any Coast Guard personnel who had been in close contact with him would also quarantine.

Nearly all members of the Joint Chiefs of Staff – a body consisting of senior military officials who advise the US president – are in quarantine after attending meetings with Adm Ray last week, the BBC’s US partner CBS News reports.

Pentagon spokesman Jonathan Hoffman told reporters there had been “no change to the operational readiness or mission capability of the US Armed Forces”.

“Senior military leaders are able to remain fully mission capable and perform their duties from an alternative work location,” he said.

The Pentagon is conducting contact-tracing related to last week’s meetings.