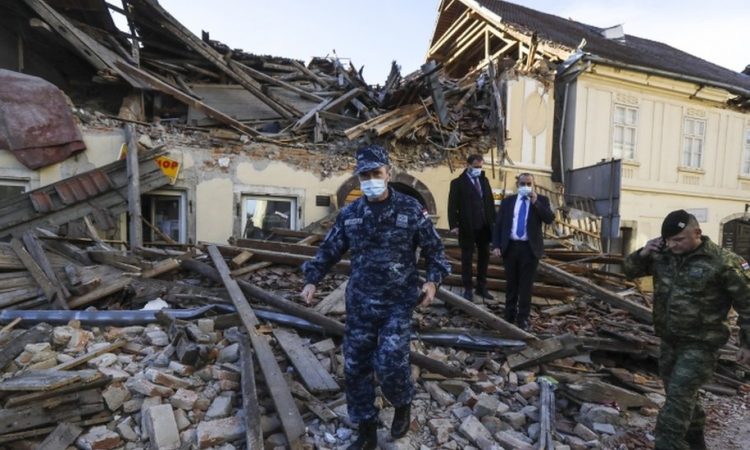 A magnitude 6.4 earthquake has struck central Croatia, with reports of many injuries and at least five deaths, including a child.

A 12-year-old girl was killed in Petrinja, the prime minister said as he visited the town.

The mayor of the nearby town of Glina said four people had lost their lives there, Croatian state TV reported.

Petrinja’s mayor said around half the town had been destroyed and people were being pulled from the rubble.

The earthquake could be felt in the Croatian capital Zagreb, in neighbouring Bosnia and Serbia, and as far away as Italy.

One woman was pulled alive from the rubble of the town hall in Petrinja, Croatian media reported.

“We are pulling people from the cars, we don’t know if we have dead or injured,” Darinko Dumbovic, the mayor of Petrinja, told regional broadcaster N1. “There is general panic, people are looking for their loved ones.”

The mayor was speaking to reporters on Tuesday when Petrinja, home to 20,000 people, was hit by another, weaker, tremor.

People were also injured in the nearby town of Sisak. National broadcaster HRT said the local hospital there was struggling to cope with the number of casualties arriving for treatment.

Tomislav Fabijanic, head of emergency medical services in Sisak, said they were seeing fractures, concussions and some people had needed surgery.

The GFZ German Research Centre for Geosciences reported that the earthquake struck at 11:19 GMT at a depth of 10km (6 miles). The second tremor followed an hour or so later.

The Croatian Mountain Rescue Service said that rescuers from across Croatia had travelled to Petrinja to help with the search and recovery effort.

Prime Minister Andrej Plenkovic, who rushed to Petrinja, said: “We have information that one girl was killed. We have no other information on casualties.”

“The army is here to help. We will have to move some people from Petrinja because it is unsafe to be here,” he added.

A kindergarten also collapsed in Petrinja, but it was empty at the time of the quake. In a village just outside Petrinja, a worker told N1 that nine of its 10 houses were destroyed.

Slovenia has moved to close the Krsko nuclear power plant it co-owns with Croatia.

The US Geological Survey said it was the largest earthquake to occur in Croatia since the introduction of modern seismic instrumentation. An earthquake of similar size occurred in 1880 near Zagreb.

A magnitude 5.2 earthquake hit central Croatia on Monday and there are fears of more.

Branko Dragicevic of the Serbian seismological institute told the BBC: “We can expect further quakes.”