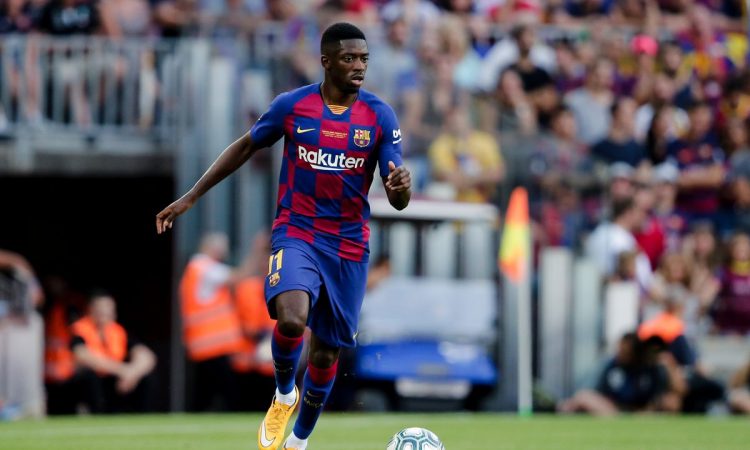 Barcelona coach coach Ernesto Valverde has revealed that Ousmane Dembele could return to full training on Friday after recovering from a hamstring injury.

Dembele is not expected to be involved in Saturday’s La Liga trip to Granada due to the knock he picked up during Barca’s opening day 1-0 defeat to Athletic Bilbao, but his progress brings the Spanish champions closer to having a fully fit set of attacking options.

“He has not yet trained with the group but today we hope he will return to full training,” said Valverde told reporters on Friday.

When he returns, Dembele will face fierce competition for his place.

Luis Suarez played for the first time in over a month in the 5-2 victory over Valencia last weekend while Lionel Messi made his first appearance of the season in the goalless Champions League draw at Borussia Dortmund on Tuesday.

In their absence, Antoine Griezmann has carried the mantle up front in recent weeks, while the youthful pairing of Carles Perez and, in particular, teenage sensation Ansu Fati have both impressed.

“We’ll see who plays and how things are,” said Valverde. “But it is clear that the system has to be adapted to the players.”

Valverde also admitted it would be a “setback” for Barca if Fati goes with Spain to the under-17 World Cup next month, when he could miss seven games for his club, after the Guinea-Bissau-born attacker was granted Spanish citizenship on Friday.

The 16-year-old, who moved to Spain with his family when he was seven, is now eligible to represent the country at the tournament, which takes place between October 26 and November 17.

“We will wait for him to be called up first,” said Valverde. “But it would be a setback because he is a player that is contributing a lot to us at the moment.”

Asked if he would try to persuade Fati, who moved to Spain when he was seven, to remain with Barcelona, Valverde said: “I don’t think he will ask me for advice about it and I don’t like giving advice very much … Everyone has to make their own decisions.”

Barcelona sit fifth in La Liga after a bumpy beginning to their title defence has seen them win only two of their opening four league games.

Messi could make his first start of the season at Granada, after coming off the bench in the second half in Dortmund

The Argentinian had been nursing a calf problem sustained on August 5.

“I thought he played well given the difficulty of the game,” Valverde added. “And given he has not done any pre-season. He was involved and good. Hopefully more minutes will help him and tomorrow is another day when he can play.”

As well as Dembele, Jordi Alba is expected to be unavailable against Granada. The full-back has a hamstring problem, meaning Junior Firpo will likely make his first start since joining Barca from Real Betis in the summer.