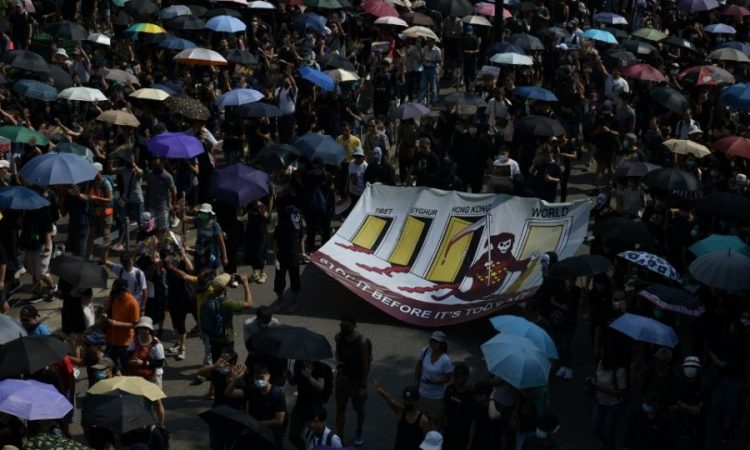 People take part in a pro-democracy march in the Tsim Sha Tsui district in Hong Kong on October 20, 2019. - Hong Kong has been battered by more than four months of sometimes violent unrest that have battered the economy, sparked by a now-shelved bill allowing extraditions to the mainland but have since morphed into a movement demanding greater democracy and police accountability. (Photo by Ed JONES / AFP)
208views

Large crowds of Hong Kongers defied a police ban and held an illegal march on Sunday, their numbers swollen by anger over the recent stabbing and beating of two pro-democracy protesters.

But tens of thousands joined the unsanctioned rally regardless as the movement tries to keep up pressure on the city’s pro-Beijing leaders after nearly five months of protests and political unrest.

Tensions were running high after the leader of the group organising the weekend rally, Jimmy Sham, was hospitalised by men wielding hammers earlier in the week.

Then on Saturday night a man handing out pro-democracy flyers was stabbed in the neck and stomach.

A sea of protesters shuffled through the streets under a canopy of umbrellas to protect from the bright sunshine on Sunday.

Many said they wanted to show they were unbowed by the attacks and authorities increasingly banning marches.

“The more they suppress, the more we resist,” a 69-year-old protester, who gave her surname Yeung, told AFP. “Can police arrest us all, tens of thousands of people?”

Philip Tsoi, a self-described frontline protester, said they needed to keep getting numbers out even though many more hardcore activists like him had been “arrested or wounded” in recent weeks.

“What I want is a truly democratic government whose leader is elected by Hong Kong people instead of selected by a Communist regime,” he told AFP.

In a now familiar pattern, the large march remained peaceful, but smaller groups of black-clad protesters vandalised some subway station entrances and mainland Chinese banks along the route.

Vigilante violence has mounted on both sides of the ideological divide.

In recent weeks pro-democracy supporters have badly beaten people who vocally disagree with them — although those fights tend to be spontaneous outbursts of mob anger during protests.

In contrast, pro-democracy figures have been attacked in a noticeably more targeted way, with at least eight prominent government critics, including politicians, beaten by unknown assailants since mid-August.

Protesters have labelled the attacks “white terror” and accused the city’s shadowy organised crime groups of forming an alliance with Beijing supporters.