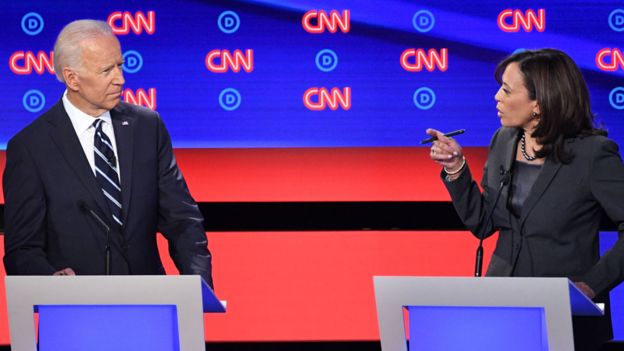 Former Vice-President Joe Biden has come under attack from other Democratic 2020 candidates in a televised debate.

There were sharp exchanges on healthcare and the southern border between the frontrunner and nine other hopefuls on stage in Detroit.

In an echo of the last debate in June, Senator Kamala Harris launched another assault on Mr Biden’s record on race.

But she herself had to defend her actions against drug offenders when she was a prosecutor in California.

“She put over 1,500 people in jail for marijuana violations, then laughed about it when she was asked if she ever smoked marijuana,” said Hawaii Congresswoman Tulsi Gabbard.

And as the candidates were introduced, Mr Biden and Ms Harris shared their first exchange of the night, with the former vice-president saying: “Go easy on me, kid.”

Mr Biden was criticised during the last debate in June for being unprepared amid fierce criticism of his ties to two Democratic senators who had favoured racial segregation, but he seemed better equipped to respond on Wednesday.

It was the second of two nights of debates among Democrats vying to win the presidential nomination, which will be announced next July at the party’s convention.