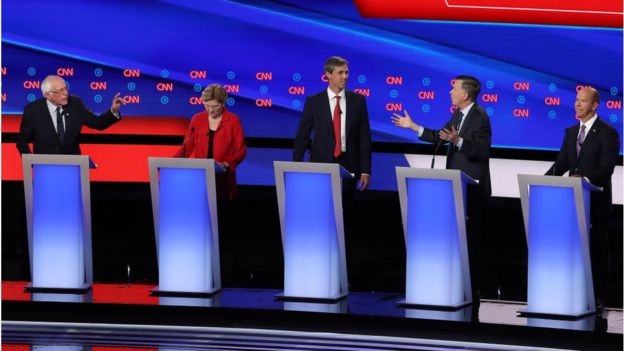 Ten Democratic presidential hopefuls have clashed in a televised US debate that laid bare the party’s deep divisions over how best to win in 2020.

Elizabeth Warren and Bernie Sanders, the most liberal candidates in the crowded field, were under attack from their more moderate colleagues.

The three women and seven men on stage in Michigan debated healthcare, border policy and how to defeat Donald Trump.

Ten more Democrats, including Joe Biden and Kamala Harris, will spar on Wednesday.

The winner of the Democratic presidential nomination will be crowned next July at the party convention. The presidential election will take place months later, in November.

Several candidates began the debate in Detroit by criticising the policies of Ms Warren and Mr Sanders as unrealistic and not the best way for the party to defeat President Trump.

Healthcare, which has been an important issue for Democrats and was a focus during last year’s mid-term elections, was a point of contention on Tuesday night.

The first question posed to the candidates was whether Mr Sanders’ plan for a single-payer health system, Medicare for All, would be “political suicide”, but healthcare was a recurring topic throughout the debate.